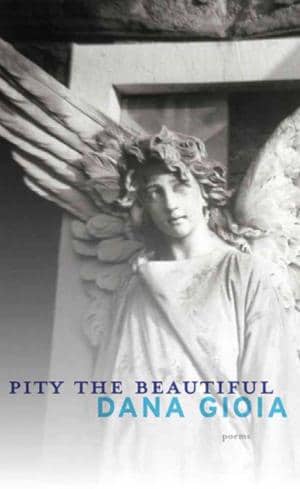 Poems for a Beautiful and Ambiguous World

Dana Gioia represents one of the greatest regrets of my life.  It was in college, near the end of the semester and I had some big paper or test or something and Mr. Gioia was giving a reading on campus. I wanted to go, but somehow the voice of prudence called me back to study.  I stayed in the library and probably procrastinated for the entire length of his reading.

I don’t remember whatever test or paper it was that kept me from hearing Dana Gioia read his poetry, but ever since I’ve always made a point never to miss a lecture or reading I really want to go to and to read every book of poetry Dana Gioia publishes.  This second resolve has given me the great joy of wonderful evenings, reading again and again, some of my favorite Gioia poems, which are some of my favorite poems at all.  Poems like “A Short History of Tobacco” from Gioia’s collection Daily Horoscope , with its clever refrain “Profitable, poisonous, and purely American” or “The Lives of the Great Composers” which is written after the pattern of a fugue, repeating themes and lines, while beautifully recounting the lives of the great classical composers.

Gioia is a remarkable poet on several levels.  First, of a student of Elizabeth Bishop, Gioia has been a part of the formalist or neo-formalist revival in American poetry.  His poems often follow set meters, rhyme schemes and standard forms like sonnets—placing his work in contrast to the largely free-verse poetry that has dominated American verse for the last several decades.

Gioia’s counterculturalism goes further in his choice of an MBA rather than an MFA.  For many years Gioia was an executive with General Foods.  In Gioia’s essay, “Business and Poetry” he offers a compelling argument that the normal path of professional poets to become academicians simply doesn’t appeal to many artists and that business or other professions have suited many of our best poets.  For instance, William Carlos Williams was a physician and Wallace Stevens was an insurance executive.  In one of Gioia’s most famous essays, “Can Poetry Matter” he argues that poetry, locked away in the academy, has made itself irrelevant.  Gioia notes that Robert Frost’s books were bestsellers but that poetry, as it has become more academic and abstract, has become mainly the interest of poets and few others.  The restoration of a more public poetry, in Gioia’s view, requires that poets get out every once and a while and associate with others.

Gioia’s interest in making poetry more public was crowned when he became arguably the best George W. Bush nominee ever and was named head of the National Endowment for the Arts.  With his experience in business, his work as a critic, and his active life as an artist, Gioia was an unusually perfect choice for the head of the NEA and the organization flourished under his tenure.

While some of the poems were written during this time, Gioia’s latest book of poetry comes to us after all of that.  Gioia now occupies the more traditional role of lecturer at the University of Southern California and he has clearly joined the ranks of the professional literati.  His poetry has in no way suffered from the transition, it seems.

Pity the Beautiful retains all that is wonderful about Gioia’s poetry—deep engagement with common life struggles, surprising use of perspective, the use of poetry as both thought piece and narrative.  In one of the first poems in the collection we hear reflections from an angel statue whose wing has been broken.

I broke my left wing in the Revolution

(Even a saint can savory irony)

When troops were sent to vandalize the chapel.

They hit me once—almost apologetically

This hint of humour in an otherwise serious and sad poem is classic Gioia, as one gets a sense that while exploring the deepest of subjects, Gioia still enjoys the play of words and concepts and their ironies.  The next lines then offer a profound reflection:

For even the godless feel something in a church…

An ancient memory they can’t dismiss.

It is a tendency I must resist to simply go through each poem of the book, and repeat a few lines from each in this review, saying, “listen to this.”  Gioia is a poet that must be shared.  To my praying friends I love this prayer at the end of his poem “Prophecy”:

O Lord of indirection and ellipses,

Ignore our prayers.  Deliver us from distraction.

Slow our heartbeat to a cricket’s call.

These are lines I want to recall against the hurried world of mixed motivations and scattered desires.