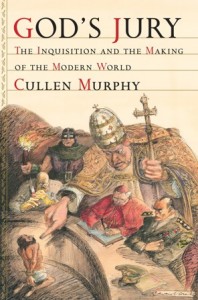 Torture and the Modern World

God’s Jury:
The Inquisition and
the Making of the Modern World

Somewhere in the souvenir stack from our family trip to Disney World in the early Aughts is a picture taken on the Tower of Terror.  As with many other thrill rides, this one offers you the opportunity to capture and preserve forever the look on your face when you realize that the bottom has just dropped out.  Only in the picture my brother-in-law’s face is hidden by a large orange bag that he had strategically placed over his head for just this moment.  We lovingly refer to the picture as “Gitmo goes to Disney.”

We do this, of course, because in the early Aughts the United States military base in Guantanamo, aka Gitmo, became synonymous with a vast system of extrajudicial detention and “enhanced interrogation” as part of the Global War on Terror.  Detainees were arriving from all over the globe with their identities shielded by orange hoods and their legal status similarly unknown.  What went on and goes on behind the walls of that offshore prison is the stuff of dark suspicions confirmed by occasional glimpses of the truth, as when we learned from the CIA that Khalid Sheikh Mohammed was waterboarded 183 times over the course of one month [92].  But whatever the reality, the sight of Americans escorting hooded detainees to a presumably tortuous fate was normalized enough that on our simulated terror ride we could laugh at the hood.  It had become a cultural icon.

The reemergence of torture as an instrument of interrogation has led more than one commentator to dredge up stories of the Inquisition.  (In this Monty Python had it wrong.  When it comes to historical precedents for Guantanamo, everyone expects the Spanish Inquisition.)  Cullen Murphy’s new book, God’s Jury, takes this well-trod path as well, but the subtitle hints at a larger project – The Inquisition and the Making of the Modern World.  Murphy doesn’t want to pin the blame for our fascination with torture on the medieval mind; he wants to indict modernity and its bureaucratic excellence.

Click on the link below to continue reading on Page 2 …