Pointing us to the Heart of God

Philosopher of the Heart: The Restless Life of Soren Kierkegaard
Clare Carlisle

In one of his parables, Søren Kierkegaard compares Christianity to a “dangerously sharp, polished, two-edged instrument” that can be recommended “unreservedly,” but because of its danger, should also be warned against. We may invite others to become Christians, but, Kierkegaard writes, “we should not hesitate, aware of the highest responsibility, to preach in Christian sermons–yes, precisely in Christian sermons–AGAINST Christianity.” (Works of Love, 191)

In another parable, Kierkegaard imagines a scene wherein a great catch of salmon is brought to Hamburg, but because salmon is a delicacy that taxes the digestion, a police order is given that restricts householders to offering salmon to their servants for only one meal per week. Kierkegaard writes, “One could wish for a similar police order against sentimentality.” (“A” in Either/Or, I, 41)

Kierkegaard remains for us a prophet preaching for Christianity by preaching against Christianity, an enemy of sentimentality and sly deceptions softly spoken as spiritual half-truths. Kierkegaard’s voice continues to reach us because he loves humankind enough to tell us the truth about God, about ourselves, and about the ways in which we compromise and soften the radical calling issued to us in and through the person and work of Jesus Christ.

Clare Carlisle’s Philosopher of the Heart: The Restless Life of Soren Kierkegaard is a recently published “Kierkegaardian biography” of the great Danish philosopher which invites us not only to hear Kierkegaard’s voice, but to walk alongside him as a companion. Carlisle writes, “this biography does not consider Kierkegaard’s life from a remote, knowing perspective, but joins him on his journey and confronts its uncertainties with him.” (xiii)

Kierkegaard was a man of diverse loves and passions, but none more important than his work of writing. Carlisle states, “To say that he was a writer is not just to point out that he produced great books at an astonishing rate and filled numerous journals and notebooks. Writing became the fabric of Kierkegaard’s existence, the most vibrant love of his life–for all his other loves flowed into it, and it swelled like the ocean that crashed restlessly across his native land.”(xii)

What did Kierkegaard write about? Kierkegaard is often credited for being a seminal thinker in existentialist thought. He is well known for his writings against the Christianity of the Danish Church, and of Christendom more generally. His account of faith in Fear and Trembling, an exposition of the life of Abraham focused on the episode following God’s command to sacrifice his son, Isaac, continues to have relevance in modern discussions of anxiety, rationality, and the possibility of religious knowledge.
ADVERTISEMENT:

But Kierkegaard is also well known for the ways in which themes that emerged in his personal life became interwoven into his writings. Kierkegaard was once engaged to a woman named Regine Olsen, with whom he broke off that engagement in favor of pursuing his “authorship.” For the remainder of his life, this decision continued to shape his work. Kierkegaard also had a complicated relationship with his father, and was also haunted by a conviction that his life would be shortened by an early death, which, in part, drove the pace at which he produced his works.

Carlisle’s biography of Kiekegaard visits all of these themes and more, but rather than proceeding chronologically as might be expected, she instead chose “Kierkegaard’s distinctive analysis of three interlocking concepts–subjectivity, truth, and time–[to] influence the shape of the book.” (xiv)

The first part of Carlisle’s treatment is set in 1843, when Kierkegaard is thirty years old. He has published Either/Or, looks back upon his broken engagement with Regine Olsen, and looks forward to define the contours of his authorship. He identifies weaknesses in Danish Christendom, believing that Christianity “has become so familiar, is taken so entirely for granted, that it might soon disappear beneath the horizon.” As he pens Fear and Trembling, “Kierkegaard wants to shake his readers awake, to say Look, listen, this is what the God-relationship involves, this is what faith requires–it might disrupt your whole existence, overturn your sense of right and wrong, make you a criminal in the eyes of the world–and now do you claim to have faith?” (14,41)

Part Two of the book looks backward, between the years of 1848 to 1813. Here we learn more about Kierkegaard’s birth, early upbringing, and formation as a thinker, theologian, and man of faith. Carlisle helps us see the context within which Kierkegaard was shaped and the ways in which this context contributed to the development of his critiques of Christendom, his self-identification as a Socrates-like figure, and his indispensable insights offered in several of his works, most notably in Repetition and The Concept of Anxiety.

In part three our biographical window shifts forward to 1849 to 1855. In this window we examine Kierkegaard’s fiercest battles. We see those whom Kierkegaard opposed most fiercely, and the ways in which these opponents responded to the enigmatic and self-conscious Dane.

Among others, Kierkegaard opposed Bishop Jacob Peter Mynster, whom he thought was allied with “worldliness” and stood guilty of sentimentalizing Christian faith. He entangled himself in conflict with Johan Fredrick Schlegel, now married to Regine Olsen, when he decided to write letters to Regine and offer them to Schlegel as both first recipient and arbiter as to whether they should be handed on to Regine (Schlegel retuned the letters and sent Kierkegaard a rebuke).

Kierkegaard became angry with his brother Peter when he compared Søren to priest and theologian Hans Lassen Martensen in a way he found unfavorable. Kierkegaard fought other battles as well, some of great intellectual magnitude and others small and petty. Carlisle does not dismiss Kierkegaard’s displays of ugliness, but lays them bare, letting us see Kierkegaard as brilliant and flawed.

Carlisle closes her biography with an account of “Kierkegaard’s Afterlife,” an examination of his enduring intellectual legacy. Carlisle is part of that legacy. She writes, “I had no intention or aspiration to become a Kierkegaard scholar, or a lecturer in philosophy, or any kind of academic.” But she “became those things anyway.” (261)

Perhaps this was due to love. Kierkegaard’s love for God, love for truth, love for writing–all of these loves, and the way he wrote about these matters lovingly–draw us in, capture us as readers, and compel us to walk with him and alongside him as we seek what Carlisle describes as the meaning of being human. It is that universal and timeless question that joins heart with heart. The philosopher of the heart captures our hearts, and points us on to the heart of God, the quest for truth, and perhaps the greatest thing of all: love. 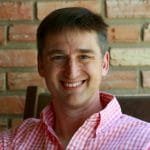 Ben Simpson serves as the Assistant Director of Spiritual Formation at the George W. Truett Theological Seminary in Waco, Texas. Follow him on Twitter (@bsimpson) or subscribe to his blog: www.benjaminasimpson.com.