I first reviewed Christian Wiman six years ago, and in these pages. I’d recently discovered him then. I started by saying: “Christian Wiman is an angry poet in his new collection. He’s angry about his childhood in West Texas, about the incurable cancer he has, and toward God. I like that about him – the searing, sharp emotion – and about Once in the West.”

This is his first book of new books, that are not translations, since 2014. Six years later and I find the poet no more at ease. A mild-mannered person in the flesh – he lectures gracefully and teaches literature and religion at Yale – when he raises his pen or clicks his keys, he bristles. And what bristles in him just now is what he describes in the Prologue as a kind of failure: “I need a space for unbelief to breathe.”

It does breathe, again and again, in these pages in ways that should cause every (un)believing person who reads them to reflect with similar honesty. Consider, for instance, the opening lines to the extraordinary poem that is Part Three of the collection:

Today I woke and believed in nothing.
A grief at once intimate and unfelt,
like the death of a good friend’s dog.
(from “The Parable of Perfect Silence”)

I don’t think I’m wrong to hear Seamus Heaney’s clicking and slurping alliterative lines in some of these poems, for instance, here:

two trees, alders, thrashed drastic in the gust
that subsided so suddenly it seemed…

to weasel misery like a suck of egg,
to be ebullience’s prick and leak,
a character pinched to characteristic,

Then, consider the contrast of the title of that one, its assonance, and how the very speaking of it (I like reading poems out loud) causes you to begin to do what the final word wishes:

“To Eat the Awful While You Starve Your Awe”

But my favorite poem in this new collection is “Spirits,” about a friend’s father with dementia, out of his right mind obsessed with sex, as the poet explores “the relation between chemistry and consciousness.” The old man had been living his long life as a happy, loving Catholic. Now, is his mind “divided like a cocktail, / one part grace and two parts loss, with a splash of wrath?” Ultimately, his friend’s father represents the poet himself, who, like the old man, is home to a certain void. But together with the friend, they toast the father “…and feel, / each in his own way, the tiny, divine starburst in the brain / by the gray, gray lake.” 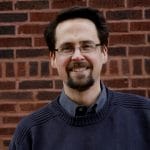 Jon M. Sweeney is an editor, publisher, and writer. His books include the biography, JamesMartin, SJ: In the Company of Jesus, published in January, and Pilgrim Walks in Franciscan Italy, coming this fall.