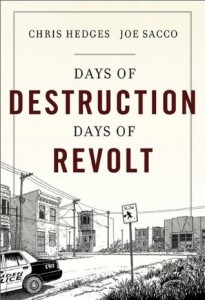 Not a Half-Loaf, But A Revolution?

Days of Destruction, Days of Revolt

The political conventions of the current political season have finished and I drive by a battered urban neighborhood.  As I drive, Joe Sacco’s poignant illustration’s of Camden, New Jersey and Chris Hedges’ lacerating prose come to mind. Carefully planned symbol-laden pictures and evocative political rhetoric juxtapose themselves with powerful reporting and images of Hedges and Sacco’s new book, Days of Destruction, Days of Revolt.   These authors take their readers on a gut-wrenching trip that begins with Native Americans on the Pine Ridge Reservation and ends in the Occupy movement’s Zuccotti Park in New York City. As tour guides of a definitely different kind, Hedges and Sacco will introduce one to Joe Balzano, Verlyn Long Wolf,  Lolly Davis, Don Paquito, and John Friesen, instead of to aspiring national politicians.

Days of Destruction, Days of Revolt is a mix of graphic novel and traditional prose reporting.  As such, Sacco’s illustrations capture the struggle of life in two modes, one of street scenes and the other in telling the stories of interviewees in comic book fashion.  Then Hedges’ prose comes at the reader like straight whiskey bracing and with a burn.  He moves from description of unidealistic warts and all pictures of battered lives to strident ideological analysis that indicts corporate capitalism.   If one is not already somewhat sympathetic to his anti-corporate viewpoint, then his stories may move but not persuade.  A former seminarian (we were in divinity school together), Hedges  went on to prominence as a journalist with the New York Times and Truthdig.  Hedges’ War is a Force That Gives Us Meaning was a popular masterpiece even though Losing Moses on the Freeway remains my favorite of his books.

This gripping exercise in history and reporting from gifted cartoonist Sacco and the award winning print journalist Hedges does not aspire to cookie cutter presentation of opposing viewpoints, rather it presents reporting with a point of view.  What it may lack in nuance, it recovers in passionate reporting  (with all of its limits and strengths) “with the bark off” as the authors’ jeremiad against an economic war by corporate elites on the poor and, in the background, on the middle class.  It accomplishes what Hedges described in his Introduction:

Joe Sacco and I set out two years ago to take a look at the sacrifice zones, those areas in the country that have been offered up for exploitation in the name of profit, progress, and technological advancement.  We wanted to show in words and drawings what life looks like when the marketplace rules without constraints, where human beings and the natural world are used and then discarded to maximize profit.  We wanted to look at what the ideology of unfettered capitalism means for families, communities, worker and the ecosystem. (XI)

Hedges and Sacco take the reader to five places where society’s winners do not dwell and hope barely takes root.  Beginning with “days of theft” in the Pine Ridge Reservation, they show us Native Americans trapped in a system of poverty, alcohol, violence and oppression, but only after they have shown the wreckage of a people after their land and life have been stolen from them.  Next Hedges and Sacco show us “days of siege” in Camden New, Jersey, where African Americans have similarly been battered by the demise of manufacturing and corrupt politics over decades that leave lives torn by drugs and brokenness.  Almost incidentally the story depicts the role of Christian faith as a coping mechanism by African Americans with this battering.