Study Centers and Thinking Christianly:
Is it time for history to repeat itself?

The prospect of reading a history book does not thrill me. The prospect of reading a history book in which there is no body count, little or no betrayal or scandal, no great injustice or disaster, and no resounding triumph of the human spirit at its conclusion—such a book is a non-starter. To Think Christianly by Charles Cotherman records the history of the study center movement in the United States—surely a niche interest if ever there was one. It boasts no body count beyond those claimed by old age. Why should you even think of reading it?

The Perfect Storm of the 1960s

For good or ill, evangelicalism has always emphasized the elements of the gospel that are concerned with personal salvation, often at the expense of all else. At its worst moments, this has resulted in strategies of avoidance, anti-intellectualism, and a diminished ability to think “Christianly” about all of life. This is where conservative American Christianity found itself in the middle of the last century.

The 1960s exposed this as a serious problem in two ways: Firstly, attractive career opportunities depended increasingly on university education, which saw evangelicals joining their peers in pursuing higher degrees around America. Secondly, the decade played host to massive social upheaval, including the so-called sexual revolution, and prominent civil-rights, feminist, and anti-war protests, all of which found eager expression on campuses. A generation of evangelical Christians was thrust into participation in deep intellectual pursuits that their churches had largely scorned, and they joined a groundswell of distrust in the inherited traditions and attitudes of their parents’ generation. They found themselves having to cope with the rigor of the academy while simultaneously having been cut loose from the assumed rightness of the social and religious foundations on which they had been raised. And, crucially, they had not been given the equipment to think Christianly about any of it.

Into this breach stepped Francis and Edith Schaeffer, the American founders of the Swiss retreat L’Abri. For a generation of young people unmoored from their childhood roots and struggling to find meaning amidst widespread uncertainty, the Schaeffers showed radical hospitality that resonated with those searching for new expressions of community. They showed a love for truth and beauty. They modelled an approach to the Christian faith that engaged in deep and robust conversation with scholarship, art, and culture—parts of life that evangelicalism at that time had no place for—all while remaining rooted in historic, orthodox Christianity. The Schaeffers had gone through their own painful journey out of American fundamentalism and into a more open view of the place of the Christian in the world a decade earlier, and they suddenly found themselves speaking to a generation of young people who were in urgent need of a model to help them do the same. The Schaeffers proclaimed a truer, deeper version of Christianity than the truncated version in fundamentalism and they were adept at contextualizing the gospel for the needs of their day. The story that Charles Cotherman tells is To Think Christianly is the story of the movement that L’Abri set in motion—that of the Christian study center.

Although L’Abri provided the inspiration, Regent College in Vancouver provided a more robust and replicable model. Regent began with a vision for an institution allied to a secular university that could reassert the centrality of Christ and the gospel to all of life, not least to “secular” studies and the vocations on which Christians then embarked. In continuity with L’Abri, it engaged in education for lay Christians that emphasized holistic and hospitable discipleship.

The Christian study centers that followed Regent’s example therefore arose out of a foundational belief that “Christians shouldn’t desert the campus for the church” (263). Universities are integral to the formation of people and the formation of the ideas that shape societies. Surrendering such a formative space would be a tragedy both for the church and for the academy.

The stories of L’Abri, Regent, and the centers that they inspired occupy the bulk of the book. These are the stories of an evangelical avant-garde, working bring the gospel to bear upon an ever-shifting social and cultural landscape.

“But why should I read it?”

I took notice of To Think Christianly because I am part of a team that is launching a study center at the University of Cape Town in South Africa. But why should anyone else take notice?

There are two main reasons. The first is that the writing of history exists so that we may learn from the past. Irrespective of your level of interest in study centers themselves, Cotherman introduces the reader to six organizations that attempted to solve the problem of discipleship in diverse and cosmopolitan campus environments. Having a catalogue of the approaches taken by these innovative Christian ministries, with their successes and failures, provides a resource to stimulate the imagination of any Christian interested in how to think Christianly about their own role in God’s kingdom, any minister concerned with equipping the church at large for ministry, or any forward-thinking people considering how they should invest their money in gospel ministry.

The second reason is based on a hope that Cotherman himself expresses: study centers have in the past taken inspiration from the melting-pot of ideas and cultural shifts inherent to the university context and become important innovators. The hope is that they might do so in our own conflicted times too (264).

This present moment in America’s history shares much in common with the upheavals of the 1960s. There are strong divisions within evangelicalism concerning our approach to the role of women and, especially, to matters of race and justice. In the political sphere, many prominent evangelicals have publicly conjoined faithfulness to the gospel with faithfulness to the current president or his party, while many others find this to be a terrible compromise of the faith. The only thing that is consistently clear about evangelical civic engagement is that no one agrees on what it means to live faithfully to the gospel in modern America.

Evangelicals in the 1960s tended (at least on paper) to disengage from politics and avoid the excesses of art and cinema; the study center movement provoked Christ-centered engagement with all of life and helped a lost generation to be captivated again by Jesus. Evangelical Christians in 2020, by contrast, are fully engaged in politics and culture, but we are not for that reason engaged Christianly. If 1960s evangelicals tried to avoid worldly culture, Christian power brokers have persuaded us that our task is to win a culture war. We are in desperate need of a new generation of innovators who can “maintain faithfulness to historic Christian orthodoxy in the face of forces from the right and left that may seek to co-opt the movement for political… ends” (266) and who can provide a robust and nuanced way to think Christianly about all of modern life.

This book provides a beautifully researched look at one such path that stretches out behind us. This backward look may just suggest what shape the way forward should take. 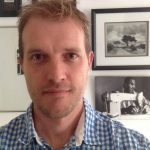 Jordan Pickering has a PhD in Old Testament biblical studies from Stellenbosch University and is one of the scholars involved in launching a Christian study center under the YMCA banner on the campus of the University of Cape Town in South Africa. Jordan is also the author of Turn Neither Right nor Left: Re-centering Evangelicalism (2019, Wipf & Stock). Find him online at: Patreon and Twitter.