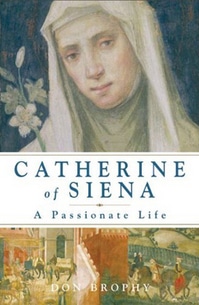 A Life Focused on Christ

Without question this new book is one of the most gratifying biographies of a saint that I have ever read.  Don Brophy, former managing editor of Paulist Press, and author of One Hundred Great Catholic Books, and The Story of Catholics in America, show us the real Catherine of Siena, and not one painted in the rosy hues of hagiography.  In thirteen chapters, Brophy guides us through the life of St. Catherine including four pages of bibliography, and thirty-nine pages of notes.

Almost everyone has heard of Catherine as the one who sucked the puss from the sores of lepers, a legend that is not true.  Such legendry is a rather standard technique of hagiography, and Brophy deals with the legends in a deft way, showing the legend and then taking a look at what most likely gave rise to the legend.

The 14th Century in which Catherine lived has been referred to by noted historian Barbara Tuchman as The Calamitous Fourteenth Century.  The pope was in Avignon France, Italy was divided into city states which really wanted nothing to do with each other unless there was a profit to be made, and mercenary soldiers temporarily out of a job marauded through the countryside destroying farms outside city walls.  Florence was rising in power, Siena was losing power, Pisa was not sure what to do while in Milan there was an absolute dictator of whom everyone was afraid, and courted to be on their side.

The Black Death ravaged the city of Siena twice in Catherine’s life, and both times she and a few others tended to the sick and dying without a thought for their own health.  Many of those with her died, but Catherine did not.  Why?  We cannot know the answer to that question, but it is insinuated in the book that Catherine was indeed on a mission from God.