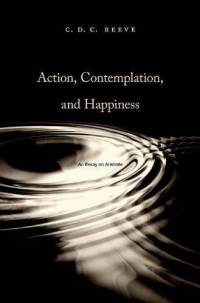 Questioning the Divide between Contemplation and Action

Action, Contemplation, and Happiness: An Essay on Aristotle

Professor C.D.C. Reeve is the Delta Kappa Epsilon Distinguished Professor at the University of North Carolina and is one of the preeminent contemporary interpreters of ancient Greek philosophy. He has not only published new and updated translations of Plato and Aristotle but has also contributed many important interpretative works that continue to break new light upon well-trod texts essential to the western intellectual tradition. His most recent contribution, Action, Contemplation, and Happiness: An Essay on Aristotle, is a welcome addition to his already burgeoning corpus.

The basic aim of this volume is to explode the general, and quite traditional, interpretation of Aristotle’s works that sees a deep dichotomy between the contemplative life (vita contemplative) and the active life (vita activa). This issue, of course, is one of great concern to a Christian audience, who, whether knowingly or not, compulsively revisit this issue to such an extent that it should be understood as a primary place of tension in the tradition of Christian spirituality. The seeds of this tension were planted in the early centuries of the Christian Church when Greek thought was used to translate and further explain the Christian story for the late Roman empire. The Alexandrian thinkers Clement and Origen quickly come to mind.

Therefore those who are invested in the Christian spiritual and philosophical tradition, particularly patristic anthropology and the Thomist tradition, will want to consult this book as a powerful and authoritative resource to engage and possibly even challenge received interpretations of Aristotle. Also, those who are engaged in attempts of recent thinkers to revitalize the role of virtue and practical reason within the pursuit of the good life will want to absorb this book. For example, thinkers following the path of Martin Heidegger, Hannah Arendt, Hans-Georg Gadamer as well as Alasidair Macintyre, Elizabeth Anscombe, Robert Spaemann, and Stanley Hauerwas.

How Reeve goes about adjusting this typical interpretation of Aristotle is through a meticulous and extensive reading of the entire Aristotelian corpus. Reeve states clearly in the preface that, “Any committed reader of Aristotle should feel at home in it.” As a way of warning, a committed reader should be defined as someone who has a serious interest in Aristotle, the Aristotelian tradition and has also made themselves quite familiar with more than just the Nichomachean Ethics.

Reeve proceeds systematically to explore the entirety of Aristotelian thought in order to address the role of action and contemplation in the good life. The first chapter is, more or less, exploring the cosmology and biology of Aristotle’s universe in order to draw later upon its implications for human anthropology. The next few chapters explore the roles of desire, perception, and understanding and their relationships to bodies of scientific knowledge (contemplative/theoretical wisdom) and to practical wisdom, the deliberation and the correct grasp of practical truth. The later part of the book engages more directly with the incredibly difficult issue of eudaimonia (happiness) and also Aristotle’s views of politics and education.

C.D.C. Reeve’s Action, Contemplation, and Happiness is a wonderfully intense study of the works of Aristotle. It deserves close reading by those genuinely invested in Aristotle at an academic level but is probably not the best gift idea for someone not already intimately involved with the “the Philosopher” as Aquinas, Dante and other medievals knew him.

Seeking Aliveness: Daily Reflections
on a New Way to Experience and Practice the Christian Faith
by Brian McLaren
Only $1.99!!!