For the Sake of Our Children

It had been a year and she was still sabotaged by the simplest things. Walking through the hallways at school. Ordering food at the mall. Getting on the bus. She wasn’t okay, she wasn’t better, and the weight of it had pulled (her brother) underwater with her. (5)

As fictional Ford High School nears the anniversary of a school shooting, student survivors have absorbed all the support that they can bear. With the slogan of Ford Strong, the administration has repainted the hallways and the teachers have tried to move on with the normal tasks of high school, but the three living teens who are most affected still struggle to pursue the basic requirements to finish high school. Two were best friends. One was a total stranger.

Brendan had been a freshman struggling to make social connections before the shooting, and after a year spent in his bedroom at home, his parents and his therapist inch him back into school by using the skills he’s learned playing Dungeons and Dragons. He still settles moments of uncertainty with a roll of the dice, but every minute raises another uncertainty for Brendan. No one knows if his D&D strategy will work, if he can reconnect with even his old D&D playing friends after a year of absence, but this strategy is all he’s got.

Claire lived through the school shooting only to lose her parents in a car crash in the aftermath. She and her adult brother Derrick move halfway across the country to make a fresh start in a new school where no one sees Claire as the girl who lived through something terrible. Her brother snags a job at an indoor skateboard park where she can pursue speed and physical risk as a way to feel alive, and to dodge the chronic flashbacks. She thinks things will just get better with time. Meanwhile she befriends a trio of boys at the skate park, including a young man nicknamed Dark who appears to be as damaged as she is—or perhaps more damaged.

Eleanor Boone was a basketball phenom before the shooting, and it is Eleanor whose horrified scream becomes the face of an anti-gun movement. She puts the “fight” in the fight-or-flight response, getting herself kicked out of school day after day for wearing a homemade F&%K GUNS t-shirt. When her face is featured on the evening news she becomes a focal point for national gun-rights groups, and her father’s construction business suffers. Her rock-solid parents steady her without saying too much or too little: they stand behind her. As the anniversary nears, she has put away the t-shirts because she needs to be in school to attend basketball practice—she needs the discipline and the and structure, and she hopes basketball will help her earn a scholarship for college.

Bliss structures Thoughts & Prayers carefully, without the cuts back and forth that are so popular in multi-narrator fiction: the book is a collection of three independent novellas with a barely-perceptible overlap of stories. Unlike many YA novels, including Bliss’s earlier novels, each teen is deeply loved, deeply listened to by family members who matter, but each victim is completely alone in their own experience of the trauma. There is no intertwining: they will not band together to overcome. All have been offered therapy: two possess significant relationships with good therapists who remain on-call and in touch with parents. Even Claire, who has avoided therapy, has an older brother who can rearrange his life and put his career on hold for her. Eleanor’s boyfriend Tyler understands her, fears for her, and wears a thick skin when she needs to vent. Their situations could not be any better to encourage their healing.

This is one of the most gorgeous themes of the book: each teen has all the support that can humanly be given, with the love and thoughtfulness so elegantly-wrought to bring this reader to tears repeatedly, but like “thoughts and prayers” offered by political leaders, the best of circumstances will not be enough to bring healing and rest. These teens were not physically wounded, but their lives may suddenly devolve into anguish at any moment.

Bryan Bliss’s masterful We’ll Fly Away drew an exquisite friendship between two high school friends in rural Hickory, North Carolina: one an athlete driven to succeed and one friend just a step away from family violence. Short-listed for the National Book Award, We’ll Fly Away sinks deep into the world of wrestling and boys who need to get away, who need any options the world can give. It is one of my favorite reads of 2018.

Thoughts & Prayers, set in the same fictional town, works differently, with each teen connecting to one way out in separate story arcs: athletics, Dungeons & Dragons, and skateboarding. Each path provides its own world-building, its own lingo, its own set of rules. Eleanor’s story rings most true to the traditional YA sports novels, but Claire’s skateboarding and Brendan’s Dungeons & Dragons are no less valid—each of the three settings requires the reader to be initiated before sinking into a new world. This reader entered with no knowledge of D & D or skateboarding, and I may have chafed a little because I liked the previous storyline so much. Bliss makes the reader’s investment worth the effort. All three teens have an option to rebound, to reshape their story and find their own new ending. The precariousness feels true. The aloneness feels true.

The reader only learns the connection between the three stories in the final pages of the final story, as Brendan chooses how he will approach the future. As the youngest and most vulnerable of the characters, Brendan is assisted by an oddball cynical teacher who will be recognized by every high school graduate in the United States. I swear Mr. Bruns is a thinly disguised Mr. Graham from my high school, and I’m pretty sure every reader  had this same math teacher. An English teacher in Claire’s school also operates a barely-legal trebuchet, and each student meets administrators who listen. In other novels by Bliss, some adults listen and some don’t, but nearly all of the adults in Thoughts & Prayers are trying their best in truly horrific circumstances: their missteps are understandable. There are no villains except an unnamed shooter, and some troubled gun-rights men who would like to take down a young woman for her anti-gun stance. They are clearly no match for her.

I cannot speak highly enough of the quiet tenderness expressed by the people closest to the teen survivors, who suffer alongside their family members, but they cannot alleviate the pain: they can only witness, and get out of the way of the recovery process with as much love and grace as possible.

I think this book asks some of the same questions as The Hate U Give—what if all the support in this world were given to survivors who need to heal? What if that love and support is not nearly enough to mitigate the horrors of violence? Both books show young people healing slowly, in the best of circumstances, but most teens don’t live in the best of circumstances. In The Hate U Give, love and support does not change police killings of unarmed black men, or the protests that follow. In the same way, the “thoughts and prayers” offered by governmental leaders and other adults are too thin a response to one school shooting after another. Thoughts & Prayers is a cry for justice, for national leadership and legislation, for mercy, for the sake of our children. 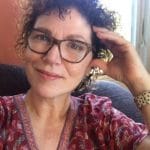 Denise Frame Harlan lives with her husband and two children on the windy edge of The Great Marsh in Ipswich, Massachusetts. She is currently writing about work, about cooking, about good books, and about the tidal river just beyond her writing desk.