Embers for the Blaze of Wonder

One Long River of Song
Notes on Wonder
Brian Doyle

[printfriendly]
For my bible study over the last few weeks I’ve been working my way through William Brown’s Sacred Sense: Discovering the Wonder of God’s Word and World.  That study has reminded me of how much wonder is at the heart of not only learning, but also the living of a good life. The world is full of wonder and the Word of God reflects that truth.  To live without an openness to wonder; to not marvel at the creation and God and one another–that is as much an affront to God as any other.

But wonder can often be hard to have in the day in and day out of life.  We move through our lists of tasks, getting one thing after another done, sitting under the alien glow of long fluorescent bulbs. We receive our tax statements and our insurance bills and we get to mired in what Auden called the “kingdom of Anxiety” to see the sacred miracle in every moment–each rain drop ready to burst into a mirrored globe, the noise of an urban street interrupted by the song of a cardinal, the curious and glorious lives of those who are all around us.

Sometimes in order to recover the truth of the world’s wonder we must find again the tune of the sacred song that belongs in all of our hearts.  Study of scripture can help with that, being in the wild, given world usually helps, but reading too can draw us back into those harmonies.  This has been true for me as I’ve read the remarkable new collection of essays by Brian Doyle, One Long River of Song: Notes on Wonder.

Doyle, the longtime editor of Portland Magazine, was a writer of extraordinary talents with over twenty volumes of fiction, poetry, and prose to his name–most of them written during a prolific period from 2010 to 2016 when he received the fatal brain cancer diagnosis that would end his life in 2017.

I first discovered Brian Doyle’s work in the pages of Orion Magazine where he published many of his essays, each animated by a sense of sacred wonder.  One Long River of Song is a book that comes to us thanks to Orion’s editor, H. Emerson Blake, the writer Kathleen Yale, and the novelist David James Duncan–all of whom worked with Brian’s blessing to bring into one volume his many essays that had been scattered throughout several slim volumes published by small presses.  As David James Duncan writes in the Forward, “Many of BD’s friends, myself included, felt that by scattering his best nonfiction through thirteen modest volumes over the years, he prevented his nonfiction from winning the national repute it deserved.” So with his friends’ help a we now have a book with the best of Brian Doyle’s short essays, each a many splendored story, insight, or epiphany.

The essays in the book are short, from prose poems that take up less than a page to essays that span fewer than four.  Most of the essays are no longer than this review and yet even in their brevity each is an opening into a vast world, a sparkling invitation to look around and see the world as you’ve never encountered it.  Take the book’s opening essay which moves from the quick beating heart of a hummingbird to the vast heart of a whale and offers such profound invitations for reflection as this sentence: “Every creature on earth has approximately two billion heartbeats to spend in a lifetime. You can spend them slowly, like a tortoise, and live to be two hundred years old, or you can spend them fast, like a hummingbird, and live to be two years old.”

We then learn in the next essay that Doyle’s interest in hearts comes from one of his twin sons who was born with a serious heart problem, one that required a series of surgeries while he was young. The essay that centers on a tiger on television and yet it moves from there to Doyle’s tears at his son’s pain and fragility, tears shared by the reader because of the beauty with which he links wonder and woe and hope in the end.  And so the essays move, observations, reflections, moments of memoir.

One Long River of Song is a book that invites sharing and reading aloud.  Shortly after my copy of the book arrived at my house, my wife commenced reading it and would stop the whole house, my two daughters playing, me cooking or piddling about, to read us the whole of a short essay on seeing God in a postal worker–”You never saw a more patient being”–or a reflection on basketball that moves from his days on the court to playing with his “perfect magic children.”

Doyle’s curiosity and joy in everything from sports to death is infectious, opening even a sports skeptic to their joy and giving any mortal a taste of a more joyful approach to death in the final essay of the book, “Last Prayer,” which opens “Dear Coherent Mercy: Thanks. Best life ever.”  A line that brings me, always slow to cry, to the bring of tears even as I write it because of the beautiful words that come before and follow after. He shows the beauty of life at its depths, but doesn’t hide from the end that comes in death, the limit of life that is the condition of all mortal creatures.

One Long River of Song is a book that I plan to keep close by, always on my desk, ready to rescue me when my imagination fails or the monotony of machines wears me down.  Doyle had a gift for seeing, he had the sacred sense of wonder, and his “notes,” his stories and insights and near poems, are like sparks–embers ready to set ablaze any life in need of the Spirit.

It’s a book that ends with an “amen” and it is with an amen that I feel I should end this review because One Long River of Song: Notes on Wonder is a book to which one can only respond with yes, truly, amen, amen. 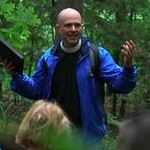 Ragan Sutterfield is an Episcopal priest working in his native Arkansas. He is currently at work on a book exploring the intersection of humus and humility, compost and creation care. To get in contact with Ragan or learn more about his work visit ragansutterfield.com.