Constructing a Cathedral of the Mind through Virtue and Habit

“Build what is good” (200), Bonnie Kristian concludes in her book Untrustworthy: The Knowledge Crisis Breaking Our Brains, Polluting Our Politics, and Corrupting Christian Community. But how does one know what is good? Or for that matter, what is true and trustworthy? What should a person do when they encounter someone, perhaps especially a beloved someone, captive to an idea or fact that is demonstrably false and producing bad fruit? Kristian introduces those questions, and similar ones, in the book’s opening chapters. In the intervening pages, she attempts to address and answer them.

Kristian begins by naming the problem because constructing anything good—much less a cathedral—is impossible without a clear vision and robust assessment of the land upon which building will occur. She says,

“The precise name for what I’ve been calling [a] “knowledge crisis” is “epistemic crisis.” The first word derives from “epistemology,” the branch of philosophy that seeks to understand understanding itself. …

Most of us, most of the time, don’t think about epistemology—and really, how could we? Whatever we believe, we have to live as if knowledge is attainable and we, individually and as a species, are fairly competent in attaining it. … We have to live as if true knowledge can be gained and shared, because it isn’t possible to function otherwise in ordinary life.

It is possible to function otherwise in the public square, however, and that’s increasingly what we’re doing. We can’t agree about what we know or how we know it. The border between knowledge and opinion is disputed territory. Whether truth exists and can be shared between us is up for debate” (12–13).

Kristian points out that the knowledge, or epistemic, crisis is nothing new. Rather, it is “only newly visible” (16). And, lest the reader assume the problem is somewhere “out there,” Kristian adds: “Recent political turmoil didn’t create it [the epistemic crisis], nor did any single incident, party, movement, or politician” (16). Even more pointedly, she acknowledges her own susceptibility to believing or adding to the epistemic crisis,

“Debates around policy, whether legal or corporate, have their place and value. But they can’t and won’t get us out of this mess, because the problems that policy might conceivably address are less the cause of the crisis than its symptoms. The real cause is deeper than bad tweets or sensationalist news or expert mistakes and the like. It’s in our own thinking, our own behavior, our own vice” (151).

Kristian turns from naming the problem to considering its symptoms. No construction project, no matter how good the land or how well conceived the plan, will succeed if its materials are not sound. Those materials, or symptoms, are not surveyed exhaustively; that is not the point of Kristian’s book. Instead, she exposes the materials so that the reader can assess whether what they are building is sound and good.

Kristian identifies several symptoms, starting with traditional and digital media. Yet the media, as culpable as it may be, is not the only entity or person found at fault, “The press isn’t innocent of contributing to our epistemic crisis, but neither are we—as the press’s audience and as social media users. There are serious problems with how our news media works; how we as readers, listeners, and viewers consume its products; and how we interact with content and one another on social-networking sites” (35).

Kristian illustrates the epistemic crisis with other symptoms, too. Chapter three, for instance, addresses mob mentalities and “cancel culture.” Other chapters consider emotionalism, on both sides of the political spectrum; conspiracy theories, especially the conspiracist movement QAnon; the death of expertise; and the reliance upon subjective experience, particularly as it relates to arbitering truth.

While each symptom of the epistemic crisis can be studied individually, Kristian shows how they regularly work together to produce a “confused mind.” It’s not only that they operate in tandem, though. They also tend to offer something: community. Kristian says her research into the epistemic crisis revealed people who felt a deep loneliness and sense of isolation. Certain appeals, such as those made by QAnon or other insider groups, ameliorated those feelings. They created community; they invited people to belong.

Those appeals, however, prove false. They produce bad fruit. Instead of delivering peace and security—the signs of safe haven—they stir up anger, strife, resentment, and, in some cases, violence. They are no bulwarks against storms, unlike Kristian’s cathedrals. Cathedrals can withstand and have withstood centuries of fire and flood. They are, Kristian suggests, an apt metaphor for how people ought to operate in an information-rich environment. She describes the cathedral this way,

“A metaphor I find helpful here is a gothic cathedral, all spires and stained-glass glow. The virtues are like the windows. They let in light; through them, we gain knowledge and identify truth. But the windows, of course, can’t stand on their own. They’re held in place by great walls of stone, and this is the function of habit. To form habits conducive to studiousness, intellectual honesty, and wisdom is to create a framework of automatic behavior in which virtue can cast it’s truthful light” (169–170).

Kristian does not start with those buttressing habits; instead, she fittingly lays some groundwork. She defines her terms in chapter eight, “A Practical Epistemology” (153–154). Those terms include truth, knowledge, and opinion, that is, the terms noted in her initial diagnosis of the problem. With the terms in hand, she addresses the human limits of knowing, and the humility that those limits should engender (154–160). She then inquires after models of intellectual virtue, crafting a list of three virtues and two corollary concepts: studiousness, intellectual honesty, wisdom, humility, and love. Developing these virtues, Kristian says, “can make you a characteristically trustworthy person. It can equip you to discern truth, gain knowledge, and communicate well what you’ve come to understand” (160).

Doing so enables better—not perfect!—thinking for the person who adopts the habits and virtues. But that leaves a lingering question: what to do when a friend or family member succumbs to fake news, emotionalism, or some other line of false thought? Kristian herself struggled with the question, noting her desire to argue people into “right thinking.” But arguments failed her. Reflecting upon that “failure,” she says, “Perhaps the most difficult part of all this … is the uncertainty. The slowness. The total absence of a quick fix” (196). She eventually recognizes two of her errors. First, her longing to resolve people’s confusion “left no room for the Spirit to act” (197). Second, she assumed she would “be the one to see the process through—that if I offered someone air, I’d get to see them take a breath” (198). Changing a person’s mind, though, is neither her responsibility nor her reward. The “Christian responsibility,” she says, “is to build amid the bleak alienation of the modern world” (199), which ultimately is an act of faith, hope, and love. It is to build what is good, looking to Christ, the source of goodness and truth. 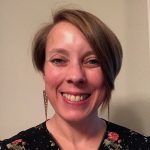