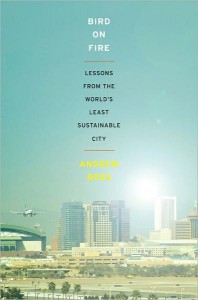 Sustainability in the Valley of the Sun

When Andrew Ross first came to the Phoenix, he was interested in learning what local artists were doing to revitalize downtown, a desert city with an urban core that, to many urbanists, leaves much to be desired. No city exists in a vacuum, however, and Ross soon came to the conclusion that to understand Phoenix he had to understand the story of the other cities and sprawling suburbs throughout the valley. It was through this research that he concluded that the Phoenix metro area — which includes nine cities with populations of 100,000 or more — was, as he puts it in the subtitle, “the world’s least sustainable city.”

Some may take issue with that claim, but Phoenix’s problem is evident: a sprawling population of four million and counting in a sun-scorched desert certainly poses significant sustainability challenges. Further, as Ross argues, a prevailing culture of rugged individualism and a widespread aversion to all forms of regulation have only exacerbated the sustainability challenges.

As a relative newcomer to Phoenix, I was particularly interested to learn what is being done to make Phoenix more sustainable, and what obstacles stand in the way. According to the book, the obstacles have for the most part gotten the upper hand. But with a heightened awareness of the need for more sustainable living across the country and around the world, Ross believes that Phoenix can point the way to the future, for better or worse.