The Making of Biblical Womanhood:
How the Subjugation of Women Became Gospel Truth
Beth Allison Barr

I was raised in an egalitarian home. My mother is a Doctor of Psychology and counsels men and women in a clinical setting. My father is a world-renowned theologian and a leading evangelical voice, one who champions women as pastors and church leaders. During my childhood, we endured family visits to my grandparents’  Southern Baptist churches, my parents processing in hushed voices after services about male headship and its display (and me trying to catch snippets of conversation in the backseat of our family car). My father has written widely on the topic and his support of women in ministry, and you can find his own endorsement on the back of Dr. Beth Allison Barr’s The Making of Biblical Womanhood:

This is the world in which I was nurtured, one in which women joyfully worked as professionals outside the home and men confidently spoke and wrote in support of women and believed women could pastor and teach, and I never questioned it. Gothard and Grudem and Piper were not household names, but instead we honored Cheryl Hatch and Ruth Tucker and Morna Hooker. It was not until my later years in high school that I realized some folks disagree with egalitarian theology and some may disagree vehemently.  (I remember calling my father as a Wheaton College student and asking him, “Who is John Piper?”)

I was sitting in my family’s living room one evening with a group of girls in my high school youth group. I cannot remember the topic under discussion or why this statement would have been made, but I can hear it now with crystal clarity by my youth leader: “Laura, we don’t believe women should be pastors.” My leader was referring to her and her husband, also a theologian and professor and pastor, and I cherished their kindness and their daughter’s friendship. It was a confusing moment for me, and the first time I was confronted with complementarian theology, though I didn’t have the vocabulary for it at the time. I wondered (and still do) if my parents overheard my leader’s statement from another room in our home. I remember telling them what my leader said, and I vaguely remember conversations such as, “We don’t agree. We believe women can be pastors.”

Fast forward the tape a bit, and I found myself sharing what my own father thought about women pastors with my friend, and shortly thereafter the friendship fell away into almost nonexistence. Maybe it was related to our fathers’ theological differences, or maybe it was just normal rhythms of teenage relationships. I suspect it was the former.

I hadn’t thought about that night and the dissolved friendship in over twenty-five years, but it roared back as I read the opening pages of The Making of Biblical Womanhood by Beth Allison Barr. Barr’s introductory chapter is stunning — her description of leaving a beloved church because “my husband was fired after he challenged church leadership over the issue of women in ministry.” Coming from an egalitarian home, this one left me particularly speechless: “I wasn’t allowed to teach youth Sunday school because the class included teenage boys. I led discussions with special permission when no one else was available.” And then this:

“I knew that complementarian theology — biblical womanhood — was wrong. I knew that it was based on a handful of verses read apart from their historical context and used as a lens to interpret the rest of the Bible… Cultural assumptions and practices regarding womanhood are read into the biblical text, rather than the biblical text being read within its own historical and cultural context.”

Barr spends the next 200 pages brilliantly “untelling the complementarian narrative” (quoting my father) biblically and historically. She writes, “Biblical women are more than we have imagined them to be; they will not fit in the mold complementarianism has decreed for them.” What does this mean? It means the Bible, in Barr’s words, is revolutionary considering its context amid the patriarchal Roman Empire. Within its pages, we find Phoebe and Junia and Mary of Bethany and Martha, women who are deacons and apostles and fellow workers in the Lord. And most importantly, Barr says, they are women who subvert traditional gender roles within the Roman Empire. They are women who “challenge the confines of modern biblical womanhood.”

Barr’s writing about the Apostle Paul is one of my favorite parts of the entire book. She describes her female students’ hatred of him; how they view his letters as the reason why women are excluded from church leadership. Her students’ feelings are understandable, given complementarian theology’s focus on Paul’s verses. “It isn’t Paul you hate,” Barr tells her students, “but rather you hate how Paul’s letters have become foundational to an understanding of biblical gender roles that oppress women.” And just as she does throughout the book, Barr examines Paul and his letters from a historical perspective, insisting we adapt to Paul rather than adapt him to be like us. Barr asks, “Could we have gotten Paul exactly backward? What if instead of replicating an ancient gender hierarchy, Paul was showing us how the Christian gospel sets even the Roman household free?”

The Making of Biblical Womanhood is unique in its medieval reflections and examples. Dr. Barr is a medievalist, and her examples draw extensively from the time period. She writes, “The medieval church was simply too close in time to forget the significant roles women played in establishing the Christian faith throughout the remnants of the Roman Empire.” Women led and preached and taught in the medieval church, though they encountered patriarchal resistance. Still, “historical memory of female leaders, past and present, empowered medieval women.” I was mesmerized reading about the heroic Christian women of the time period — from Margery Kempe to Hilda of Whitby — who resisted patriarchy. I was equally mesmerized reading about medieval preachers who preached Paul — but not with an emphasis on enforcing gender roles. Instead they taught Paul’s letters with a purpose of teaching “parishioners how to find redemption through involvement in the sacraments.” Why did the medieval church preach Paul one way and the contemporary church preach him so differently? The book is full of medieval examples like this one that make a reader pause and wonder how historical moments changed our reading, our worship, our very understanding of Scripture.

Barr’s personal examples and journey are woven throughout the book, and they stayed with me long after I finished reading. From her modesty battle with overzealous camp leaders to her husband’s firing for questioning women’s church leadership to her own #MeToo story, Barr’s examples demonstrate her own experience with female subjugation. The historical review of women’s leadership and subjugation is profound, her examples even more so.

The Making of Biblical Womanhood has made such a profound impression on me that I don’t believe I will ever again read the Bible (or the Reformation) the same way. (I will also check my Bible translation.) I will read its verses, of course, but Barr’s scholarship impresses upon me the importance of biblical and historical context, of reading the Bible through a lens of understanding, of knowing its audience and the world in which it was written. Barr taught me to read like a historian — to not just take words at face value, but to consider them in light of their context. Jesus, for example, “chose women as witnesses for his resurrection.” But this was an ancient world that “didn’t accept the word of a woman as a valid witness.” How extraordinary. How revolutionary. 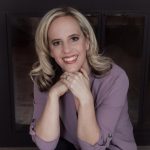 Laura Barringer is an outspoken advocate for the wounded resisters of institutional abuse. Laura is co-author of A Church Called Tov: Forming a Goodness Culture That Resists Abuses of Power and Promotes Healing (October 2020). She previously co-authored the children's version of The Jesus Creed and wrote a teacher's guide to accompany the book. She has also written articles for The Jesus Creed and Overthinking Christian blogs. Laura is a graduate of Wheaton College and currently resides in the Chicago suburbs with her husband, Mark, and three beagles. You can read more at churchcalledtov.org and follow her on Twitter at @laurambarringer.