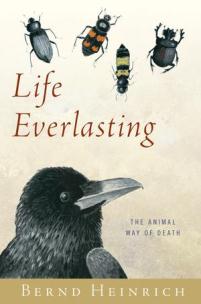 The Death of One Organism Gives Life to Legions of Others

Once upon a time – or two – I may or may not have assisted in scattering the ashes of a dear, deceased friend in an area, or perhaps areas, where it may or may not have been illegal to do so.  And, hypothetically speaking, I may (or may not) have known we were in violation of said regulatory codes at the time.  But the fact of my alleged participation in this allegedly illegal activity is not the point.  More interesting is the law or code itself: why should it be against the law to scatter human cremains in certain remote public areas?  “Ashes” (which are not particularly ashy; cremains have the consistency of rough sand or very small bits of gravel) are the end result of incinerating a body at temperatures around 1500 degrees Fahrenheit, until all that remains are solid bone fragments, which are then pulverized.  They are essentially sterile, and they present neither a biohazard nor an environmental hazard (although the cremation process itself is not environmentally friendly).  Legal codes regulating the disposal of human bodies – particularly cremated ones – likely have a great deal more to do with honoring cultural traditions and observing taboos than with securing public safety.

You think I digress, but I found myself revisiting these mysteries as I read Bernd Heinrich’s wonderful new book, Life Everlasting: The Animal Way of Death.  Heinrich undertakes (you’ll pardon the pun) a study of biological decay and decomposition after a close friend – planning for his own eventual demise – writes to ask if Heinrich would be willing to let the friend’s body decompose naturally on Heinrich’s woodsy property in Maine.  “Like any good ecologist, I regard death as changing into other kinds of life,” the friend writes.  He argues that a casket burial deprives the natural world of human nutrients.  It’s a good point, and one to which Heinrich returns in the poetic and thoughtful final chapter.  But first, he investigates.

To describe the processes of decomposition and the role of “animal undertakers,” Heinrich studies the rates of decay of deceased animals ranging in size from mice and birds to large mammals.  He documents the species of flies and beetles and the order in which they arrive at a deer carcass.  He describes the process by which a raven disassembles the carcass of a road-killed squirrel.  The full body of a moose is reduced to a pile of hair and bones in just two weeks – primarily the work of scavenging birds, flies, beetles, and bacteria.  He describes the generations of life nourished by a rotting tree trunk, and chides human beings for thinking we can improve on a system “tested in real-life conditions over eons” by removing dead trees and replacing them with genetically engineered saplings.  And in a short chapter as delightful for its gentle humor as for its biological insight, Heinrich considers “the natural process of whale recycling.”  What happens when a whale dies at sea?  It sinks to the bottom, where temperatures are near freezing “and bodies could potentially pile up forever…”  Considering that whales have been around for at least 50 million years, “the oceans would be filled to the brim with their cold carcasses” if not for the work of deep sea undertakers; sharks, hagfish, crabs and amphipods slowly skeletonize the carcass, and the bones are then colonized and reduced by bacteria, limpets, snail and worms.  “Tens of thousands of individual animals of many kinds may be at work decomposing a single (whale) skeleton at any one time,” in a process that can take up to ten years.

Heinrich laments the alarming decline of large undertaker-animals, whose demise he links to “our decimation of the vast herds of ungulates, which provided their food base.”  And he notes that our rapid removal of dead animal carcasses which have historically been left to “return to the earth” contributes to the nutrient deficit we inflict on the natural world: “Even the road-killed deer and other animals that the highway department picks off the roads are disposed of by burying.  Vultures would do the job better if we let them.”

Why are we so quick to bury the evidence of mortality?  Heinrich entertains aspects of this mystery in the final chapter.  “Most of us want to remain part of the physical world for as long as we can, and we want another life we can believe in.”  Many of us are deeply rattled by death, by “that period… when a body is little changed and yet suddenly bereft of life.”  Heinrich argues that humans have always invented stories about human creation to help us deal with the unsettling unknowns.   But for Westerners, at least (Heinrich does not make this distinction, but I will; it is largely a Western derangement), we construct the stories in part to help us regard ourselves as separate from and superior to the rest of the natural world.  “We deny that we are animals and part of the wheel of life, part of the food chain.  We deny that we are part of the feast and seek to remove ourselves from it, even though we kill and consume animals by the billions and permanently remove the life resources for many more.”  Heinrich argues that we need “a new creation story” that celebrates the fact of our kinship with the rest of nature.

This is a lovely book, which might seem a strange thing to say about a study of decomposition.  But Bernd Heinrich is a skilled writer, and though his descriptions are vivid and thorough, they are not revolting or gruesome.  Then again, if we take these meditations to heart, why would they be?  This creation story is really good: the death of one organism gives life to legions of others.  What a way to go.