She was an ambitious spiritual entrepreneur who not only changed the face of church-based Christian education, but also wrote a book that sold millions of copies, built a thriving publishing house, helped to establish a well-regarded Christian camping ministry, was instrumental in launching the National Sunday School Association and developed a unique outreach to Hollywood celebrities. She played a key role in shaping the faith of faith leaders including evangelist Billy Graham, Campus Crusade for Christ (now Cru) founder Bill Bright, and Young Life’s Jim Rayburn. She hobnobbed with the influential, traveled the world, indulged in her love of fashion, and was “Christian famous” during her lifetime. If Henrietta Mears lived today, she’d probably have a social media following in the millions and be a headliner at the stadium-sized Christian conferences the marked the Christian landscape until the COVID shutdowns put a pause on such gatherings last year.

Historian Arlin Migliazzo’s Mother of Modern Evangelicalism: The Life and Legacy of Henrietta Mears offers a detailed, well-documented portrait of this seminal figure who came of age during the modernist-fundamentalist battles that shaped the Protestant religious landscape during the first few decades of the twentieth century. Mears brought a combination of college education, unflinching faith, ecumenism, and chutzpah to her cherished fundamentalist world and would be a key player in what would become the modern Evangelical movement during the middle of the 20th century.

Migliazzo captures some of the core contradictions of her ministry:

…Mears remains something of an enigma – a woman who accepted the limitations of her time yet simultaneously pushed past those restrictions in ways few seemed to notice. She supposedly never allowed herself to fill a pulpit on Sunday morning or to be called a ‘preacher’ as was her contemporary Aimee Semple McPherson. But she taught Scripture rom more pulpits across the country than most ministers or priests.…She never directly promoted a political or social agenda and even exhibited some inconsistency on matters of race, but her emphatic and relentless teaching on the absolute necessity of living the Christian life as an act of consecrated service led many of her students to advocate for the downtrodden and dispossessed – with her full support.

She was unflinching in her commitment to Christ – a commitment that reflected the dispensational eschatology and Keswick conference emphasis on sanctification that marked her Baptist upbringing in Fargo, North Dakota. After graduating from college, the never-married Mears became a public school teacher in Minneapolis, and plunged into Sunday School ministry at First Baptist Church, harnessing what she’d learned of modern educational theory to reshape the congregation’s Sunday School program. Under her innovative leadership, enrollment boomed.

Her mix of contemporary teaching methods and a deep commitment to orthodoxy caught the attention of leaders at Hollywood’s First Presbyterian Church. In 1928, 38-year-old Mears moved to California to take the helm of the conservative congregation’s Sunday School program, where it grew exponentially over the following decades.

She began writing her own Sunday School curriculum as she couldn’t find existing materials that suited her educational methods and conservative beliefs. By the mid-1930’s, word about this curriculum had spread. In response, she was instrumental in launching Gospel Light Publications in order to produce and disseminate these materials.

Mears applied her entrepreneurial gifts in a number of other ways, as well. In the late 1930s, a resort in the San Bernardino Mountains of southern California came on the market, and Mears worked with others to purchase it to be used as a Christian camp and training facility, transforming it into the Forest Home Christian Conference Center. She helped launch the National Sunday School Association in order to support and equip teachers. Because of First Presbyterian’s proximity to the center of the film industry, she developed the Hollywood Christian Group in order to share the message of Christ with those involved in the entertainment world.

Migliazzo offers a detailed unpacking of the names, dates, and places surrounding Mears’s many accomplishments, but The Mother of Modern Evangelicalism is not hagiography. He does not shy away from revealing her contradictions and character flaws. For instance, Mears did not appear to be inclined to examine the ways in which racist and anti-Semitic tropes were embedded in her thinking, a reflection of the time in which she lived and her position of privilege within white Christian subculture. And Type A Mears could be dominating in relationships, charming those on the periphery into greater commitments to service to the church, but was far more unfiltered and unyielding with those in her inner circle. Migliazzo cited several examples of her bulldozer approach, noting, “A significant corollary to the straightforward self-confidence that carried her ministry forward on so many fronts was a decided difficulty in apologizing to those she had wronged in some way.”

Mears’s role in the nascent rise of evangelicalism as a more culturally-connected, market-ready version of old time religion cannot be overstated. Migliazzo writes, “For since the second decade of the twentieth century she had been in the advance guard of those who worked to recast orthodox Christianity. Though committed primarily to the educational welfare of those under her authority…her local endeavors became the springboard for imaginative thinking and inspired action whose effects rippled far beyond Minneapolis and Hollywood.” He underscored her role in creating evangelical subculture, noting, “Henrietta Mears could justifiably be considered a foremost architect of the twentieth-century reformation of Protestant America.”

Mears died in 1963, but as Arlin Migliazzo’s excellent work reminds us, her influence lives on, not only in the specific spaces in which she served and led, but in every corner of evangelical subculture, from Sunday School classrooms to small group Bible studies attended by Hollywood A-listers. 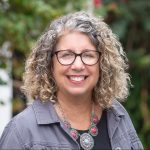 Michelle Van Loon is the author of seven books, including Translating Your Past: Finding Meaning in Family Ancestry, Genetic Clues, and Generational Trauma (Herald Press). Michelle has a wide range of published work to her credit including articles, curriculum, devotionals, articles, and plays. She is a founding member of The Pelican Project, a women's theology organization, and the co-founder of ThePerennialGen.com, a website for midlife women and men. Learn more about her work at MichelleVanLoon.com