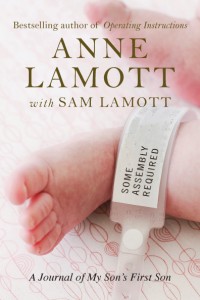 You Look Beautiful in that Grandson

Some Assembly Required: A Journal of My Son’s First Son.

A portion of this review is included in our current print issue.
(Which is in the mail to subscribers now! Are you a subscriber? )

[ Watch a video of Anne talking about this book…]

I began to write this review halfway through listening to the audiobook version of Some Assembly Required as I traveled back from a trip to North Carolina. I was pondering the adjectives I could insert to describe the ever profound, yet laughable tales of Anne Lamott. I had waited anxiously for this follow up to Operating Instructions – her journal of her son’s first year. What a joy it had been to come to know the crazy cast of true life characters that made Anne and Sam’s “family” of blood and choice. The vivid illustrations of her first time mothering mistakes were engaging and endearing. How could this book disappoint with Sam, Anne’s son, that baby I fell for in Operating Instructions, co-authoring? Yet, even with the treat of Sam and Anne narrating the audiobook, it did.

The first half of the book lived up to my high expectations. Anne writes from a place of division – devastation and worry about her so young son and his girlfriend Amy (they were 19 and 20 respectively) and their impending parenthood; and her enthusiasm at the notion of becoming a grandmother while wishing the timing were ten years later. She narrates so well the birth of Jax around whom a makeshift family–including Amy and her parents who would visit from North Carolina – is created. How as Jax enters the world, Anne falls for Amy and after he appears, Sam falls for Jax and of course, the grandparents fall for “the loveliest baby boy.” Anne describes meeting Jax: “I felt as though I was seeing a river gorge, from way up on high on a bridge, silenced by the vastness of his tiny face, the depth of his brown-black eyes.”

Jax and his entourage (Sam, Amy, and the other set of grandparents–Trudy and Ray) encamp as the “village” at Anne’s house. The usual discomfort of living with those to whom you are not accustomed ensues; yet “through it all, though, the ups and downs, Jax shines like a pearl”. Then Sam and Amy and Jax go home and Nana Anne relates time spent with them at her place and how she desperately misses him between those times. Those true life characters from Operating Instructions and Anne’s spiritual memoirs make appearances in Some Assembly Required. And it’s lovely. And messy. And fraught with humanness. Told in the usual Anne Lamott self-effacing, hysterical way.  But, in the middle of Anne Lamott-ness comes the voice of Sam in the form of emails and “interviews.” And it gets in the way. These bits feel inserted for the sake of placing Sam’s name on the cover and creating a charming description for booksellers. It seems Sam did not write anything (other than the preface) for this book; his parts are lifted from emails or coaxed from him by his mother in interview form. While Sam’s voice does capture the emotion and frustration of his young fatherhood and the father who was absent from his early childhood, I want more. And I don’t get it.

I can deal with the distraction of Sam popping into the narrative here as I had been promised a bit of Sam. The book continues to be about Jax and how he continually changes the lives of Anne, Sam and Amy. But on January 11, Jax disappears. For forty pages. Anne visits India with her friend Bill. Jax is seen in babies around her and she misses him of course, but book shifts from a memoir about being a grandmother to one about her spiritual experience in Dehli and Varanasi; on the Ganges and to the Taj Mahal. This feels like part of another book. A good one indeed, but not one about Jax.

We get back on track from February through July; Anne struggling mostly with her feelings for Amy as she vacillates between staying with Sam in San Francisco and packing up Jax for a move closer to family and friends in Chicago.  And gives us great Jax-getting-bigger stories and some of Sam-on-his-own when Amy and Jax are away. But in July, Anne takes another trip; to Europe this time. This distraction is briefer, but this trip prefaces the last few pages of the book. She does come back in time for Jax’s first birthday party after which Anne realizes Jax has “grown from a helpless newborn to an accomplished and complex human being who is days away from walking. He’s grown me, too; grandchildren grow you.” Then it’s over. That’s it. Oh Annie. Again, I want more.

“You look beautiful in that grandson”, Anne is told by a woman at church. As does Some Assembly Required. It does not “wear” that grandson quite enough to earn the subtitle, “A Journal of My Son’s First Son.” Perhaps better suited to “a journal that takes place during the first year of my son’s first son (with a few words by my son)”? If you have not read a book by Anne Lamott, don’t start here. If you have read all Anne’s memoirs, it is worth a read and you certainly will gain a few new Annie zingers. From this year, Anne recounts: “I was reminded of the Four Immutable Laws of the Spirit: Whoever is present are the right people. Whenever it begins is the right time. Whatever happens is the only thing that could have happened. And when it’s over, it’s over.”