Seeing the World Through
Flannery’s Heart and Soul

“Quick step on the stick of the wooded path,
I step back as if to undo sound,
as if the soul I stalk could hear past
the raucous song of herself unfound.”
From “Flannery’s Hunt” (19)

Angela Alaimo O’Donnell’s fourth title, Andalusian Hours: Poems from the Porch of Flannery O’Connor, is motivated by a self-described “literary obsession” with the brief, but punctuating body of work by American writer Flannery O’Connor. In her introduction, O’Donnell describes this shift in her study of O’Connor from scholarly focus to an imagined conversation. Indeed, the 101 sonnets reflecting this lifelong conversation sound like the voice of a friend.

O’Donnell’s sonnets act as soliloquies in Flannery’s voice. Each page opens with an excerpt from O’Conner’s published writing and feels like a snatch of conversation we overhear between Flannery and an array of family, friends, colleagues, penpals, and fictional characters. For each Flannery snippet, O’Donnell responds with a sonnet. The tone changes as we move down the page, from O’Connor’s characteristic wordplay into the imagined unknown of Flannery’s interior life. In this way, the reader is invited to listen in stereo with one ear to her public discourse and one to the “mind and heart, the life and art” of Flannery O’Connor.

Navigating this autobiography in verse requires an acquired reading cadence. In the same way O’Donnell became a student of Flannery’s idiomatic rhythms, we need to settle into the space between each pithy epigraph and the more formalized pattern of the sonnet. The two literary devices have more in common than I’d expected and only began to appreciate once I settled into the musicality of the book. With a few jolting exceptions, each begins somewhat casually then swerves into a satisfying emotional resonance. Long-time Flannery O’Connor readers may find in O’Donnell’s sonnets a kind of catharsis since O’Connor so religiously disallowed it in her fiction, often leaving her readers in a kind of purgatorial limbo.

This back and forth between O’Connor’s pith and O’Donnell’s empathy provides readers of Andalusian Hours double the literary and emotive satisfaction with each page.

“Waking early I took the Georgia light
As a sign from God of the wrecked worlds’ end.”
From “Flannery Rising” (12)

I was first introduced to a Flannery O’Connor novel in my mid-thirties, over a decade ago. I absorbed The Violent Bear It Away like a snake bite. Horror was my first instinct and then, after the initial shock, hope for greater capacity to enter the world of O’Connor’s unrelenting gaze into the violence of the human condition. Her words hit the page with the force of a minor prophet.

At the same time I was being introduced to Flannery O’Connor, I happened to make my first visit to the state of Texas to attend a ministry retreat. On my drive from the airport into the Texas Hill Country, I encountered for the first time a snake warning sign at a public rest area. With no apologies offered, public works officials helped travelers calculate the risk for enjoying the Texas countryside: if you wanted to enjoy a scenic view you had to account for the possibility of crossing paths with poisonous serpents.

Between the rumors of reptiles in the Texas Hill Country and a state of transfixion with O’Connor’s Francis Marion Tarwater, I accidentally interposed the two. I found myself thinking as I drove from Highway 10 and into the jagged canyons surrounding the Frio River Valley: If Flannery O’Connor was a place, she would be the Texas Hill Country.

Obviously I hadn’t read much yet, because everybody who knows anything about Flannery O’Connor (at least everyone who knows more than I did at the early stage) knows that if Flannery O’Connor could be summed up by a place it would be the American South, specifically rural Georgia. For this reason, her characters almost always embody the history of America’s deep south, but the scope and depth of their flaws reveal the venom we all carry in our hearts. With catechetical diligence, O’Connor reminds us we were all snakebit at birth.

“Local folk are forever sniffin’ up sin.
We smell it sure as some smell peach pie,
the hot sweet fruit of it, the lusty crust.”
From “Flannery Comes Clean” (41)

A dozen years later, I’ve read every short story, both novels, several biographies, diary entries, and anthologies of O’Connor’s letters and we continue to make regular trips to Texas. Last summer after dropping our daughter in Austin for her fall semester, my husband and I meandered back home to Connecticut by way of the deep south. On a whim, and in order to avoid Atlanta area traffic on college football’s opening weekend, we hit the backroads of rural Georgia and made an overnight stop in Milledgeville. With all my reading, I’m still puzzled by Flannery O’Connor and wanted to see the world from her favorite vantage point, the front porch at Andalusia.

We enjoyed the luxury of being the only guests on the property, allowing us time to linger on the wide, screened porch lined with rocking chairs. We rocked a while in the breeze through the floor to ceiling screens, while I read a few entries from a copy of The Habit of Being I’d pulled from a basket of O’Connor’s books near the front door. My family had endured a hellacious summer caring for a loved one through a severe mental health crisis. We were exhausted and acutely aware how tentative the thread that holds us all between health and illness. Sitting on Flannery’s porch, I felt a bit like one of her characters trying to wrangle grace out of disorder and discovering respite just outside her front door.

Like rocking on Flannery’s front porch, Angela Alaimo O’Donnell has skillfully expanded my understanding of Flannery’s softer dimensions as well as the parade of “sinners, fools & jerks” emerging from her typewriter each morning, Flannery’s vantage point contains multitudes.

“I won’t grow old
so I need to get wise the fast way.
…
I stare down the barrel, write what I see,
pray it might make a good woman of me.”
From “Flannery’s Misfit” (61)

Milledgeville wasn’t our only stop last summer. After leaving Texas, we drove straight to Montgomery, Alabama to visit the Legacy Museum and the National Memorial For Peace and Justice founded by lawyer and activist Bryan Stevenson’s Equal Justice Initiative. We walked under a canopy of 800 weathered steel columns hanging from the roof, each one representing a U.S. county etched with the names of their lynching victims. Knowing we’d be heading to Andalusia the next day, I searched the labyrinth for the column representing Baldwin County Georgia, home to Milledgeville. I found it and the names of two victims.

Writing this review in the middle of national protests against unrelenting and violent white supremacy in the United States feels about as jarring as visiting Andalusia the day after walking the lynching memorial. While her stories teem with the darkness of all kinds of human prejudice and hypocrisy, O’Connor’s correspondence with friends reveal an ambivalence to the civil rights atrocities happening in her Jim-Crow community.

I’m grateful to Angela O’Donnell for including a few of the brief allusions to the issues of racial equality Flannery includes in her letters.

Regarding her decision to decline an invitation to meet with writer and activist James Baldwin in Georgia, O’Donnell imagines this inner monologue:

“It’s not as if he ain’t a good man
or that much of what he says ain’t true.
…
But where I live we kill our prophets,
beat and butcher them, hang them from the trees.
…
I choose to tell the truth in quieter ways.
We both live to fight another day.”
From “Flannery & James” (36)

While Lupus shrunk O’Connor’s life at Andalusia to the pathway she navigated from bed to desk to porch and, eventually to an early death at age 39, we sense the loss of hearing from a mature Flannery. Angela Alaimo O’Donnell helps us imagine the possibility and expands O’Connor’s interior life to a pathos many of us couldn’t imagine without her help.
In this slim collection, O’Donnell courageously ghostwrites the words of a master writer and offers extemporaneous prayers for a devout prayer-reciter. O’Donnell acknowledges this attempt as presumptuous, “as any act of imagination must inevitably be” and must be done by artists with commitment, devotion, and humility. She invites us to see the world through Flannery’s heart and soul as well as her words.

Commitment, devotion, and humility, these three but the greater gift is the invitation to see Flannery’s heart and soul not in spite but through her words. This is a work of imagination compelled by love.

“When he [the priest] blessed my eyes & ears, lips & hands,
I felt how lucky I’d been they were mine,
for how else would I know and love the world
were it not for these gifts I’ve received?
And now there another gift I want – time.”
From Flannery “In Extremis” (118)

In her introduction, O’Donnell asks rhetorically “How can any of us ever enter the mystery of another soul?” and then answers “It is not fully possible.” She then joyfully and lyrically invites us to try. 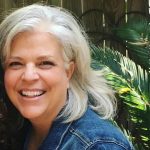 Tamara Hill Murphy lives with her husband Brian, an Anglican priest, in Bridgeport, Connecticut. Her writing has appeared in Plough, Think Christian, and The Englewood Review of Books. She is a Spiritual Director and Selah fellow with Leadership Transformations and is currently learning how to parent her four adult children. Find her at www.tamarahillmurphy.com