Nothing is Ever Wasted

Where Goodness Still Grows:
Reclaiming Virtue in an Age of Hypocrisy

In 1994, William J. Bennett published The Book of Virtues: A Treasury of Great Moral Stories, a collection of stories, reflections, and poems ruminating on characteristics like responsibility, courage, persistence, faith, and self-discipline and other qualities for a total of nine virtues. A year later he wrote The Book of Virtues for Boys and Girls, for middle-graders. Both books were extremely popular with evangelical readers and used by parents to teach their children as part of family devotions.

Amy Peterson writes of these books as part of her formative years in her conservative evangelical household in her book, Where Goodness Still Grows: Reclaiming Virtue in an Age of Hypocrisy. Peterson reclaims virtues with nine different virtues where she looks back on how these specific virtues were understood within conservative evangelical culture, then explores how those qualities shifted for her, and how she understands them now.

The introduction to her book is titled, “Virtues for the Apocalypse” to identify where her own perceptions began to shift: after her overseas missionary efforts faltered (which she describes in her previous book, Dangerous Territories) and her subsequent move to the West Coast of the United States, she began to care about the environment, immigration, health care, and the prison system. She writes, “But even as I began voting differently than my parents and many Christians I knew, I continued to believe in the good faith of those Christian leaders who supported Republican candidates.” (xvi)


But the infamous United States 2016 presidential election shocked her. The candidacy and eventual victory of Donald Trump “lost me”. (xvii)

I had expected them to care about the way Trump treated women …Again and again, though, the people who had spoken out against Clinton spoke forcefully in support of Trump. (xvii)

Then Peterson asks herself if she needs to discard all she learned from the evangelical church yet she wasn’t willing to discard everything. Instead she reclaims what was valuable to her: “… that I am created in the image of God, that I am worthy of love, and that I am in fact, deeply loved.” (xviii)

Peterson is a deep thinker and cares about her shock over the hypocrisy of conservative evangelical culture. She returns to the book her father read aloud to her and her siblings, Bennet’s Book of Virtues. She began studying the book and notes less than ten entries were written by men of color and white women, without any contributions from women of color. The rest of the forty-three pieces were written by white men.

I began to understand that [Bennett’s] treatment of virtue lacked a fundamental curiosity and basic awareness that ethical decision-making is complex; it lacked an understanding of the need to look outside the familiar for true insight. His vision of virtue was not panoramic and universal; it was myopic and self-referential. Could such a limited vision of virtue provide fertile soil for hypocrisy? (xx)

Peterson concludes that Bennett’s book reflects the larger evangelical culture as “simplistic” and “moralistic” which then creates a weaponized understanding of virtue “that exists primarily to uphold the existing hierarchy.”

She wisely teases apart the definition of the word “apocalypse” which she uses in her introduction title, that it does not mean the end of the world as described in The Late, Great, Planet Earth written by Hal Lindsey in the 1970s, or throughout popular culture like “The Hunger Games” films or in dystopian novels written by Margaret Atwood. Rather, apocalypse means “an uncovering, a disclosure of something that had been hidden, a revelation.” (xxiv) For Peterson, much has been uncovered in the broader culture and particularly in evangelicalism. But what has been uncovered can be healed—converted—into God’s kin-dom.

And Peterson begins to lament—lament as a holy complaint; the way to proclaim this is what’s wrong and this is what needs to change. She describes lament as the “seedbed of hope.” From her laments then she re-imagines virtues as tools for “cultivating wisdom, not a weapon to wield against enemies; as wild, not tame; as embodied, not just written; as multifarious, not singular; as relationally negotiated, not legislated.” (xxv)

After she laments, she begins to construct the virtues which she believes are grounded in God’s kin-dom, on earth as in heaven: kindness, hospitality, purity, modesty, authenticity, love, and discernment.

She concludes her book focusing on hope and how she practices hope:

Practicing hope means seeking justice, caring for the earth, making and celebrating beauty, awakening others to curiosity about their lives, and proclaiming through these actions that God is God, that death and corruption don’t’ win, that despite all evidence to the contrary, every part of this world is precious, and rescue is on the way. ( 163)

Peterson is an excellent writer who compelled me to underline copiously throughout the book. She is a thoughtful writer which caused me to add stars, exclamations points, and other notations to my underlining. She shares honestly and vulnerability of her deconstruction process without sneering at the people she loves who still identify as conservative evangelicals. Rather, Peterson chooses to believe that nothing is ever wasted, including her childhood faith. 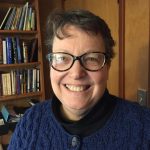 June Mears Driedger is a writer, spiritual director, and a residential member of The Hermitage, a contemplative retreat center in Three Rivers, Michigan.