The Natural Inclusion of Women

Women and the Gender of God
Amy Peeler

I don’t fit neatly into either of evangelicals’ established camps, complementarian or egalitarian—and the fact that these binary categories dominate the current debate often leaves me frustrated. So I found the question at the heart of Amy Peeler’s Women and the Gender of God clarifying. It’s a simple question, like the kind put by one of my kids—who haven’t ever pondered conundrums such as Paul’s unique use of the Greek word “authentein” in 1 Timothy 2 or whether Deborah was God’s first choice to lead Israel or more of a last resort. Simply put, what does the Bible’s use of gendered language to depict the Godhead—both figurative (“Father”) and literal (Jesus, incarnated as a male)—mean for women? How can men and women equally bear the Imago Dei, as Christianity has historically taught, if God himself chose—allowing perhaps for a heavy dose of anthropomorphism, and thus within the limits of human language and categories, but nevertheless chose—to reveal himself as male?

These are questions I’ve hardly allowed myself to ask, suspecting any satisfying answer would rely on some sneaky evasion– suspecting, that is to say, that in the final analysis the Bible actually does value men over women. But in reading Peeler’s book I was forced to confront them, and grateful to have such a perceptive guide in seeking biblical answers.

Peeler frames the problem like this: “Many orthodox theologians…support masculine language and conceptions of God with analogical reasoning that is limited to males alone. God initiates like men initiate. God begets like men beget. God the son was male like men are male. When it is added, in some Christian circles, that only males can represent God—not because of God’s free choice but because of a certain male-like quality in God—the underlying but unstated belief rises to the surface….It is easier to devalue and then mistreat those humans who are believed to be less like God” (2).

Peeler quotes extensively from all three Christian traditions (Protestant, Catholic, Orthodox) to show how this impulse has wended its way through historic biblical understanding to the present. She argues carefully and compellingly from Scripture, engaging both conservatives drawn to Christianity’s alleged manliness and post-Christian critics repelled by its perceived misogyny. The result is a more nuanced account of God’s fatherhood and Jesus’s maleness that does not privilege men.

“God as the Father of Israel…remains figurative, contained within the ideas of founding or care, never procreation,” she writes, but “the New Testament does not play it so safe….God caused the birth of a baby.” Thus “it seems impossible to call God father without asserting at the same time that God is male” (13). Peeler devotes roughly half her book to addressing this problem: probing the meaning of the fatherhood of God, assessing spurious theological arguments, and exploring solutions. She rejects some—trying to balance paternal language with maternal, for instance, or continuing use of the biblical male language but with intense re-education of certain terms. Her own solution is disarmingly straightforward. In relation to the Incarnation, God could not be “mother” because Jesus already had a mother. “Calling God ‘Father,’” she writes, “proclaims the unparalleled role played by the young Jewish girl named Mary, the Mother of God” (117).

Here the doctrine of the virgin birth is pivotal:  if Jesus, a man, came solely from the DNA of a woman, then the Incarnate Lord offers full inclusion for both men and women. “The only way it is possible within the system of human procreation for God to involve both sexes in the revelation of divine embodiment is to have the image of God born as a male from the flesh of a female” (141). In this regard the Incarnation represents unparalleled inclusivity: “A male-embodied Savior with female-provided flesh saves all” (137).

Peeler argues that the Incarnation recasts the Old Testament’s bridegroom/husband/father imagery, making sense of it in a way that doesn’t grant males superior status. “Christians can and should address God…as ‘Father,’” she writes, “not because God is male and not because God is more masculine than feminine but because God the Father as an expression of the triune will, sent forth his Son born of a woman. There is no God apart from the one who willed to dwell in the womb of Mary. Jesus of Nazareth, with his form of address for God, born out of his unique experience, reveals who God is. This God is indeed Father” (115). (This God is indeed Father, but not a “He.” I found Peeler’s omission of male pronouns in reference to God, though perhaps understandable in view of her goal, a shade discomfiting.)

If roughly half the book probes God’s gender, the other half examines Mary’s role. As a Protestant from a low-church tradition (in which—I don’t think this is an exaggeration—Mary ranks about on par with Gideon), I found this extended meditation provocative and beautiful. Peeler persuaded me that God’s choice of a woman to bear the Messiah through the birth canal proves his value of the female—especially in view of Levitical purity laws in which bodily discharges rendered one unclean. She shows, further, Mary’s agency and honor in accepting this role. Against some scholars who have caricatured the incarnation as “divine rape,” casting God in the role of strong male and Mary as coerced female, Peeler takes pains to demonstrate how the angelic visitation recorded in Luke’s gospel honors Mary, and how Mary, even as she employs the language of servitude, demonstrates humble strength and self-respect in her conversation with Gabriel.

Mary not only thoughtfully questions the angel but—crucially—she consents. She speaks. (Unlike Zechariah, who’s struck mute before he’s given the chance to consent.) And the angel does not depart until she speaks her consent. “God honors her, grants her agency, and she says yes. It is her yes that changed the fabric of the universe. Somewhere in the empty spaces on the page between her yes (Luke 1:38) and Elizabeth’s recognition of the babe (Luke 1:42), the Holy Spirit transforms the willing flesh of Mary to form the body of God” (87). (Feel free to read that line again; it gives me chills every time.)

Mary’s role—reduced by some to a womb, celebrated for birthing the Christ child but not for raising him—does not, in fact, end on Christmas morn. She actually parented Jesus. If he “grew in wisdom and stature, in favor with God and humanity” (Luke 2:52), then it is Mary who discipled him. The gospel accounts offer only glimpses of Mary’s role post-nativity: seeking and scolding the young Jesus for remaining in the temple when the others had returned home; intervening at the wedding feast; evidently prophesying with the disciples at Pentecost in fulfillment of Joel 2. Yet in each instance the mother of Jesus affirms a place for women equal to that of men. “Mary ministers inside and outside the home, with acts of service and with speech, as parent and proclaimer” (153).

Space does not permit me to trace Peeler’s argument for women’s ordination. Suffice it to say it’s a distinctly sacramental argument, and she concedes some believers prohibit ordination on grounds other than those she addresses.  But even readers whose minds are made up on this issue will benefit from her analysis, as well as her thoughtful critique of the reflexive ways we tend to remake God in the image of man—and in the process, risk undervaluing women.

Reading Women and the Gender of God did not resolve all of my ambivalence on the issue of women’s roles. But it did provoke me to offer fresh praise to God for the ingenious and elegant way he enveloped both sexes in one singular divine embodiment—and asked a young, marginalized woman to bear that living embodiment within her own body and life. May women in our churches today know with confidence that God esteems them as equal to men. And may I offer an emphatic “yes” to God’s call on my life with even a glimmer of Mary’s devotion and love. 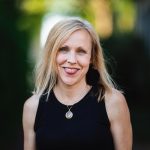 Heather Morton is a freelance writer and editor based in Cheverly, Maryland, just outside of Washington, DC, where she lives with her husband and three teenage children. Her work has appeared in Plough, Fathom Magazine, Touchstone: A Journal of Mere Christianity, and other publications. You can read more of her writing at heatherfmorton.com.