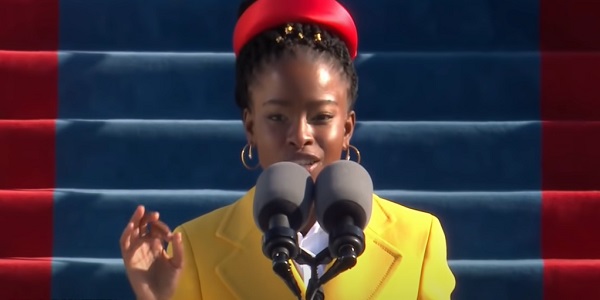 Amanda Gorman, the first National Youth Poet Laureate, stole the show at President Joseph Biden’s inauguration yesterday, as she read her poem “The Hill We Climb,” which was adapted for the occasion after the insurrection at the US Capitol on January 6.

Who is Amanda Gorman, author of The Hill We Climb?

Amanda Gorman (born March 7, 1998) is an American poet and activist. Her work focuses on issues of oppression, feminism, race, and marginalization, as well as the African diaspora. Gorman was the first person to be named National Youth Poet Laureate. She published the poetry book The One for Whom Food Is Not Enough in 2015. In 2021, she delivered her poem “The Hill We Climb” at the inauguration of U.S. President Joe Biden. In 2016, Gorman founded the nonprofit organization One Pen One Page, a youth writing and leadership program. She wrote a tribute for black athletes for Nike and has a book deal with Viking Children’s Books to write two picture books. In 2017, Gorman became the first youth poet to open the literary season for the Library of Congress, and she has read her poetry on MTV. She wrote “In This Place: An American Lyric” for her September 2017 performance at the Library of Congress, which commemorated the inauguration of Tracy K. Smith as Poet Laureate of the United States. (via Wikipedia)

Watch the video of her reading “The Hill We Climb” below, as well as her interview afterwards with CNN’s Anderson Cooper.

(both to be released in September)

Amanda Gorman The Hill We Climb reading
at the 2021 Presidential Inauguration:


Interview with with Anderson Cooper:


The Englewood Review of Books
Poetry Archive
(100s of Poems!)

When was the Amanda Gorman poem The Hill We Climb written?

Amanda Gorman was informed of her selection as inaugural poet on December 30, 2020, and asked to write a poem that contributed to the inauguration's overall theme of America United, but without any other direction. Gorman wrote several lines a day, and had the poem around half-way completed when the 2021 storming of the United States Capitol occurred on January 6. Gorman told The New York Times that she had been struggling to complete the poem and worrying about whether it would be adequate. She said that the storming marked the day that the poem really came to life in an interview with CBS News, as she worked the events into her poem. Gorman finished the poem on the night of January 6. (via Wikipedia)

How was Amanda Gorman selected as the inaugural poet?

Her 2017 reading of her poem In This Place at the Library of Congress, grabbed the attention of Dr. Jill Biden, who contacted her last month about writing an original poem for the inauguration ceremony. She was informed of her selection on December 30, 2020, and on January 14, 2021, the Inaugural Committee announced that Gorman would be giving a poetry reading at the event.

When will the Amanda Gorman poem The Hill We Climb be published?

Shortly after the inauguration, Penguin Young Readers announced a publication of 150,000 hardcover copies of the poem in spring 2021. The poem will also be included in a collection titled The Hill We Climb, set to be released by Viking Books for Young Readers in September 2021. The day after the inauguration, The Hill We Climb and Change Sings, a picture book by Gorman also scheduled for publication by Viking in September 2021, were the two best-selling print books at Amazon and Barnes and Noble.