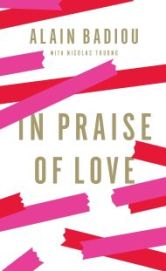 When We Talk About Love

In Praise of Love

According to the Romance Writers of America and Business of Consumer Book Publishing 2012, the Romance Fiction genre is the single biggest in the industry, generating revenues of over $1.3 billion a year. Romance novels are so ubiquitous that this figure won’t surprise anyone who regularly visits a bookstore. The same holds true for other areas of culture as well. The prominence of love and romance in popular music, for example, is so obvious that it hardly needs to be pointed out. Despite the constant talk about love in our culture, love seems curiously absent from the work of serious philosophers, intellectuals, and scholars. Much of the cultural work involving the love is like the familiar sculpture by pop artist Robert Indiana that merely presents the word LOVE (with the “LO” placed over the “VE”), suggesting that what the word love means is obvious and doesn’t require careful study and analysis.

An inveterately hard-headed and abstract bunch, philosophers have at times denied the value (or the very existence) of love. Some have seen love as the opposite of the philosophical enterprise because falling in love seems to signal the triumph of the emotions over the rational intellect. The philosopher Arthur Schopenhauer complained, in one extreme example, that he would “never forgive women for experiencing a passion for love, thus making it possible to perpetuate a human species that was in fact worthless” (13). Understandably, this history has given philosophy a reputation for being one of the least sexy sections of the library, right behind calculus and tax law.

This is why it is all the more surprising that 75-year-old Moroccan-born French philosopher Alain Badiou is trying to change that reputation. Badiou insists that “the realm of thought is never sealed off from the violent onslaughts of love” (10). For Badiou, like Plato at the distant dawn of Western Philosophy, love is a “quest for truth” (22). He writes, “what is the world like when it is experienced, developed and lived from the point of view of difference and not identity? That is what I believe love to be” (22). Loving is a process that uproots and reorients our very existence and is therefore extremely risky and often painful.

Badiou explains that this version of love is subversive and countercultural in the world we currently live in. The version of love we encounter in popular culture is what Badiou calls the “safety-first concept of love.” “In today’s world,” he writes, “it is generally thought that individuals only pursue their own self-interest. Love is an antidote to that” (16). He excoriates a French dating site called Meetic that offers to help its users “get love without chance,” that is, to get love in its easiest and most highly-consumable form and on our own terms (5). Badiou compares this approach to “no commitment” financing and “zero-dead” wars, dubbing it the “safety threat” (8). This threat is made doubly dangerous by the fact that many spheres of our culture no longer see love as essentially different from the impulse to shop, to accumulate, and to pursue individual desire and self-interest. For many it is just a another way to try and get what I want and sites like Meetic promise to teach me, through actual coaching, how to discard a person that no longer suits me, as if they were last year’s style.

If Badiou shuns zero-risk, preplanned forms love, it isn’t because he thinks that love is based on excitement. Rather, a central part of entering into the risk of love is the decision lovers make to stay together. He emphasizes that real love has “tenacity.” He writes, “to give up at the first hurdle, the first serious disagreement, the first quarrel, is only to distort love. Real love is one that triumphs lastingly, sometimes painfully, over the hurdles erected by time, space and the world” (31). Later he writes that, “To love is to struggle, beyond solitude, with everything in the world that can animate existence” (104).

If this all sounds a bit heady, make no mistake: this book is for everyone. It is surprisingly practical at times. It can teach you about everyday experiences like jealousy, which Badiou, unlike the French novelist Marcel Proust, does not see as a constitutive element of love. He emphasizes that “my love’s main enemy, the one I must defeat is not the other, it is myself, the ‘myself’ that prefers identity to difference, that prefers to impose its world against the world reconstructed through the filter of difference (60).” Badiou even offers insights into why love requires a declaration. For Badiou this points to the fact that love is a manifestation of the eternal in time. It is part of a key moment in which we live out a chance meeting as if it were our destiny, or when we “release the encounter from its randomness,” in Badiou’s terms (45-46).

Like many philosophers, Badiou makes use of his own jargon and philosophical system. Badiou’s jargon, however, has an elegance that is deeply suggestive and poetic. His turns of phrase could perhaps be described as grand, but they are never clunky. Despite the challenges of the language, the book retains its freshness due to its short length (barely more than 100 pages) and its conversational tone due to the fact that the book is based on a live interview.

Brett Beasley is a graduate of Calvin College and Loyola University Chicago. He currently works in publishing at the American Library Association. He lives in Chicago with his wife and two rabbits.

The Worst Hard Time:
The Untold Story of Those Who Survived the Great American Dust Bowl
by Timothy Egan
Only $2.99!!!