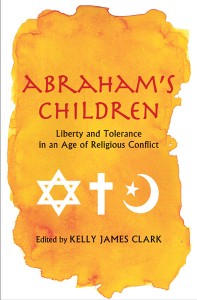 Abraham’s Children : Liberty and Tolerance in an Age of Religious Conflict

As I write about the topic of religious tolerance and Abrahamic faith, my local paper reports an escalating shadow war between Iran and Israel as well as Israel’s potential involvement in Syria’s conflict. During an election year, such stories remind us of two important presidential issues that will get little air time from our candidates: US involvement in the Israeli/Palestinian peace process and the rise of Iran as a potential nuclear power and threat to Israel. Can there be peace in Israel? If not, would mere tolerance be enough? These two questions are the skandalon, the unavoidable obstacle, of any Abrahamic interfaith dialogue in which I have ever participated. Sure, Jews, Christians and Muslims can talk about reading sacred texts with generosity and outline a mutual hermeneutic of trust. Then someone brings up Israel and the conversation unravels.

In Kelly James Clark’s collection of essays, Abraham’s Children, the conversation centers on possibilities for interreligious tolerance. Clark is Senior Research Fellow at the Kaufman Interfaith Institute at Grand Valley State University in Grand Rapids. Trained in philosophy, Clark’s Philosophers Who Believe was voted one of Christianity Today’s 1995 Books of the Year. Most recently, Clark works with Muslims, Christians and Jews on religious liberty and offers this book as the product of his labor.

The provocation behind the creation of this collection is reminiscent of the 2007 book Is Religion Dangerous? by Keith Ward. Both Ward and Clark challenge the allegations of “new atheists” like Dawkins, Hitchens and Harris, revealing religion as a force for goodness, reconciliation, freedom and tolerance. In his introduction, Clark defines tolerance as the ability to endure beliefs that one takes to be either false or immoral — the devaluing of another person’s principles or practices without devaluing the person who holds those beliefs. This vision of tolerance may not embody the loftiest of human values, but when the alternative involves religious-sanctioned insults, beatings, jailing, or murder of dissidents, tolerance is a positive step forward. Focusing on religious tolerance is more important than ever, especially in a globalized world in which it is easier to export intolerance and violence.

Abraham’s Children has three sections representing each of the Abrahamic faiths. Clark invited representative thinkers and activists to present essays on forbearance from the perspective of their faith traditions. Each was asked to use their holy writings, theology, and personal stories to demonstrate an understanding of tolerance and liberty.

“Abraham’s Jewish Children” are represented by Israeli authors and peace workers. In this first section, we soon learn that the issue of prime importance is the insistence of Jews to have Israel’s existence recognized by the Arab world. Contributor Dov Berkovits could not be clearer; the moral commandment to protect Israel is non-negotiable. Until Palestinian leadership offers recognition of Israel’s right to exist, there will be settlements in occupied territory for self-protection. Though the children of Esau and Israel are brothers and sisters, those who do not recognize Israel’s right to exist are Israel’s enemies. However, even an enemy’s human rights must never be compromised. Two of the most moving essays in the entire book are written be peace activists Leah Shakdiel and Arik Ascherman who, arising from their own losses and wounds, have put their lives on the line to demonstrate compassionate justice and religious liberty for Palestinians and Israelis alike.

“Abraham’s Christian Children” spans the Christian theological spectrum. The section opens with an essay of quotes from Jimmy Carter’s various memoirs. Carter’s patchwork essay is the least satisfying piece in the book, with a somewhat dry-but-firm follow-up by Yale’s Nicholas Wolterstorff, who reworks some of his previously-published material on John Calvin’s perception that to harm others is to harm God. The book picks up energy again with Yale theologian Miroslav Volf, who makes a convincing case that New Testament ethics call followers of Christ to honor others, over and above mere toleration. In comparison with the Jewish essayists who base their opinions on the Talmud, Midrash and personal experience, most of the Christian essayists’ views are informed by theological reflection.

“Abraham’s Muslim Children” prefer to go directly to their holy writings in order to substantiate their assertion that Islam is a religion of moderation, peace, toleration, and submission to God. The Muslim essayists provide abundant text and proof text to substantiate their point. The point they make is crucial; Muslims can both safeguard their religious values and live in a democratic society. This final section closes with an eye-opening and heart-wrenching essay by Rana Husseini on so-called “honor” killings across the world and a stirring chapter by Iranian scholar Abdolkarim Soroush, who reminds us that tolerance, like love, is a virtue that undergirds all religions.

What I ultimately want from this book is missing. It opens with the idea that essential to tolerance is Arab recognition of Israel’s statehood.  On this point, the Christian essayists talk loftily and the Muslims remain silent. Both the authors and the readers trip over the skandalon once more, flinching from one issue that needs to be talked about before we can take the next step, beyond tolerance, towards honor and love.

Abraham’s Children offers a well-crafted, insightful, and evocative addition to ongoing Abrahamic conversation. This book would work well in church discussion groups, community study circles and college religious studies classes. For Christian pastors who need to learn more about Judaism and Islamic perspectives on tolerance, this book will help. For any who engage in interfaith dialogue within their own communities, Clark provides a solid introduction to the issues, scriptures, and stories that each religion refers to, as well as a look at some of the rocky road of interfaith dialogue, both the way traveled and the journey ahead.