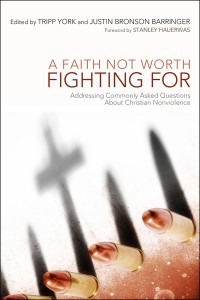 Honest Questions about War and Peace

A Faith Not Worth Fighting For: Addressing Commonly Asked Questions About Christian Nonviolence.

To paraphrase Stanley Hauerwas, pacifism is entirely unnatural to us, but in Christ, it becomes a vocation to be embraced. That being said, articulating how and why Christians should reject war is a constant difficulty. The questions are, in two senses, never ending. First, “war” is never the same all the time, and human conflict is never a straight-forward affair; pacifists, if they are hold to their convictions must continue to revisit their commitments in each and every age. Secondly, pacifism within the Christian tradition is by far the minority opinion; holding to a presumption of nonviolence in human relationships requires that one reckon with issues of Christian history, Scriptural accounts of war and political identity.

Pacifists, thus, are always in need of able guides to these complex questions. While there are any number of works which provide analysis of the varieties of pacifism or offer a sustained apologia for pacifism, most of them lack engagement in one of above named areas. It is here where the recent volume edited by Tripp York and Justin Bronson Barringer, A Faith Not Worth Fighting For, provides a much-needed work, drawing together analysis of these multiple areas with vex pacifists into one work. With essays by Amy Laura Hall, D. Stephen Long, Gregory Boyd, Gerald Schlabach, and a variety of other pastors and scholars, the work delves into the complexities of pacifism by asking the straight-forward questions that are most often asked of those committed to nonviolence.

Most often, it is the Scriptural ambiguity about nonviolence which vexes Christians looking for direction. Thus, the volume devotes the most attention to the Scriptural passages which would appear to undermine a presumption of nonviolence. Gregory A. Boyd’s chapter tackles the issue of whether nonviolence is expected of nations or of only Christians, Ingrid Lilly addresses the Old Testament war narratives, and Andy Alexis-Baker takes up the question of why Jesus didn’t ask the centurion to abandon his military vocation. Alongside essays from Samuel Wells, John Dear, and J. Nelson Kraybill, the essays exploring the Biblical witness concerning nonviolence are rich and honest. As Kraybill points out, Scripture’s theology on the issue tends toward the polyphonic, creating room for nonviolence though not univocally bearing witness to nonviolence.

Other issues, such as the practical questions of protecting third-parties, policing, and attacks upon loved ones, are taken up by Stephen Long, Schlabach, and Amy Laura Hall. Alongside other essays by Justin Barringer and Robert Brimlow, the more personal, existential questions of nonviolence are addressed with candor and honesty. As with any issue of discipleship, the question of nonviolence is not one which can be simply thought but not acted upon. These chapters address the pastoral issues of nonviolence with sensitivity and academic acumen, looking at nonviolence as it impinges upon our daily life.

In sum, A Faith Not Worth Fighting For would be an excellent supplement not only to undergraduate courses on war and peace. But more importantly, this volume provides an excellent entry-point into congregational questions on nonviolence. While there are other works which provide a constructive account of nonviolence, the advantage which this volume has for instruction purposes is that it frames the issues in precisely the form which most people have: honest questions.

The End of Evangelicalism?
Discerning a New Faithfulness for Mission:
Towards an Evangelical Political Theology
By David Fitch
Only $2.99!!