As a student of poetry in graduate school, I first encountered A.E. Stallings’s poetry when I read her piece, “The Tantrum.” The poem describes her young son’s response when he realizes she has cut her long hair. He crawls under the piano and weeps. He is inconsolable as he learns that those we love are capable of disappointing us. Although he is scolded by some adults for his tantrum, the poem seems to validate his feelings. Eventually, the child is told his mother might grow her hair back the way it once was, but this does not happen. This giving of false hope is indicated by the poet, and the reader learns that loss must be acknowledged and accepted in order to be endured.

After this initial brush with Stallings’ poem, she became to me “The Poet Who Wrote ‘The Tantrum.’” At times, writers can be reduced in our minds to a single work that resonates with us or even one specific well-known piece. For many, Frost has become “The Road Not Taken,” Hopkins “God’s Grandeur,” and Poe “The Raven.” The cure for this way of thinking is to read widely within an author’s body of work.

As poignant as “The Tantrum” is, it is only one of many such powerful poems written by Alicia Elsbeth Stallings. This Afterlife is a compilation of 125 poems taken from her four previously published books: Archaic Smile (1999), Hapax (2006), Olives (2012), and Like (2018). The book also contains a dozen lesser-known uncollected poems, and three pieces of Stallings’s Greek-to-English translation work. Even the translations have Stallings’s steady, elegant voice. And it is this voice that seamlessly weaves each section of the book together in a tapestry of war and peace, ancient and modern life, and domestic and national happenings.

Perhaps this richness stems from the poet’s life experiences. Born in Decatur, Georgia, Stallings grew up in the United States but has lived across cultures. After studying classics at the University of Georgia, she continued her education at Oxford University, where she met her husband, journalist John Psaropoulos. The couple moved to Greece in 1999, where they currently reside. Stallings’s aptitude with ancient languages led her to translate some of Hesiod’s work, and most notably Lucretius’s The Nature of Things into rhyming fourteeners. (A fourteener is a line of poetry that contains 14 syllables.) Some of her numerous honors include nominations for the Pulitzer Prize and the National Book Critics Circle Award, fellowships from the Guggenheim Foundation, and the sought-after MacArthur Foundation “Genius Grant.”

Stallings has remained grounded, and the poems in This Afterlife reveal a winsome equilibrium between intellect and compassion. Her poetry, with its many allusions to Greek mythology, often portrays present-day domestic life. In the poem “Ajar,” a household appliance breaks down, but another breakdown occurs—one between husband and wife. The piece begins: “The washing-machine door broke.   We hand-washed for a week. / Left in the tub to soak,   the angers began to reek, / And sometimes when we spoke,   you said we shouldn’t speak” (1-3). The poem goes on to mention Pandora, the mythical character who opens a forbidden box and releases trouble into the world. In this piece, trouble seems to be related to words, but also to silence, and the use of caesuras in each line alludes to a relational rift throughout the ordeal. The poem ends with these lines: “Yes, out like black-winged birds,   the woes flew and ran riot, / But I say that woes were words,   and the only thing left was quiet” (14-15).

The poem “Ajar” also demonstrates Stallings’ elevated use of rhyme, which characterizes much of her work. Today, most poets use rhyme sparingly (if at all) or indirectly. Some see it as a cheap linguistic thrill or decry it as an unwanted link with tradition. While some might call Stallings’ selected poems a response to the contemporary rejection of rhyme, it should be understood that she is not using the technique to frustrate critics, or as a gimmick. Rather, she is writing in the way that comes naturally to her and other poets for whom rhyme is inborn. Her rhymes are not flat, noun-to-noun constructions—they are nuanced and meaningful. As a guest speaker at Cornell University’s Messenger Lecture Series, Stallings said, “[Rhyming poets] do not think up what they want to say and then find rhymes for that thing . . . [Rather, the rhymes] lead the poet to the discovery of what the poem is about.” Additionally, in a Lithub interview, Stallings said, “Rhyme is a sort of echolocation—you speak out into the world, and it answers back to you.” She seems to revisit this idea in her poem, “Explaining an Affinity for Bats,” which contains these lines:

“[They] travel by a sort of song that rings

True not in utterance, but harkenings,

Who find their way by calling into darkness

Rhyme is often related to closed poetic forms. This is because forms employ patterns of word sounds, and while rhyme has declined in popularity, traditional forms still enjoy some reverence. A typical poetry collection may include a scattering of sonnets and perhaps a villanelle or pantoum if one is lucky, but something different occurs in This Afterlife. Readers encounter a multitude of closed forms. Villanelle or villanelle-like poems are prominent, with their six-stanza, song-like repetition. There is the 39-line sestina, “Like,” the small triolet, and the four fibs (“Fib” refers to a poetic form wherein each line’s syllabic count is based on the Fibonacci Sequence). Perhaps the most outstanding use of form is in the poem “Lost Things,” written in ottava rima, the book’s longest poem with its 36 sections, each containing eight lines and adhering to the abababcc rhyme scheme. Finally, the collection is rife with sonnets. There were so many I lost count. And Stallings doesn’t give us stodgy, rigid works but pieces that are limber and bright. Consider “Glitter,” which is about having a daughter. It is a sonnet written in perfect iambic pentameter, with a volta in the tenth line. Stallings’ modern voice fully inhabits the form in a way that feels effortless. Speaking of glitter, she writes:

“You have a daughter now. It’s everywhere,

And often in the company of glue.

As these lines demonstrate, excellent poems often lead us to think, “That’s just exactly it,” as if her words suddenly unite our shared experience. In This Afterlife, the number of these near-epiphanic encounters is almost overwhelming. So, my advice is to read slowly. I spent weeks working through the book because I wanted to appreciate each poem fully. To do this, I drank in the language, noted links between form and content, and looked up numerous allusions to Greek Mythology. Before beginning this book, readers may find it helpful to refresh their understanding of the following characters: Persephone, Hades, Arachne, Eurydice, Apollo, the Muses, Daphne, and the Minotaur.

For readers familiar with Stallings’s poetry, the book’s one disappointment may be its lack of new material. If the cover could have advertised “New and Selected Poems,” that would have been an incredible draw. And yet this collection is still exceptional, perhaps most importantly because it stretches us to consider the relevancy of ancient things such as myths and rhyme, matrimony, and parenthood. As we strive to find our place in this modern world, it seems we need the help of those who understand that history is never completely behind us—those who, like A.E. Stallings, might beam us up to Mount Olympus for a drink and a meal and a tour of the palace. 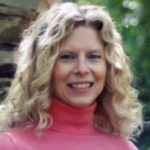 Jennifer Schuldt has written and published Christian devotional material for the past fifteen years. A graduate of Cedarville University, and the C.S. Lewis Institute Fellowship Program, she is currently earning an M.F.A. in writing from Lindenwood University. She is a Midwestern mother, wife, occasional painter, and bibliophile.