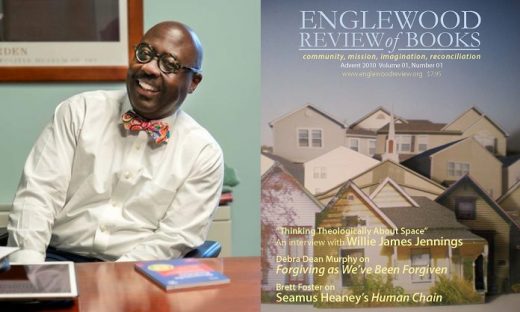 Editor’s Note: This interview was conducted in 2010, soon after the initial release of Willie Jennings’s important book, The Christian Imagination. I often find myself making references to this interview, so I figured it was long overdue to put it online and make it freely accessible to our readers.

Willie Jennings’s book The Christian Imagination (Yale Univ. Press 2010) is one of the most refreshing and profound works of Christian theology in recent memory (Read our review here). We had the opportunity to sit down for a phone conversation with Prof. Jennings.

Englewood Review of Books: Thank you for writing this book. It’s such an excellent work that portraits not only the depths of the brokenness of Western culture, but also the even deeper hope of– to use your word– the “intimacy” of the Kingdom of God. Tell us a little bit about the background of the book and how it came to be.

Willie James Jennings: It’s part of the work that I’ve been doing here at Duke for many years, and it comes out of teaching theology and Black Church studies here, and living in this context and trying to think through the crucial issues facing the Church. There are certain accounts of modernity and of the Enlightenment that have been stated over and over again in places like Duke– and have some elements of truth to them– but are missing whole aspects of the problem, and in fact in many ways they do not realize how they participate in the problem. The book really comes out of trying to narrate this current condition for Christian life.

ERB: One of the things that was particularly striking was the way in which this work brings together some themes that aren’t often heard in conjunction with each other. I’m thinking particularly of race (obviously a key element of your work), but also how you bring that into conversation with the reality of our disconnectedness from the land, and from all creation.

WJJ: [This disconnectedness from the land] is for me, a crucial missing element in the way that most people talk about the problem [of race] – at a layperson’s level or the way in which it is discussed in the academy or the way Christian ministry tries to envision how to address issues of race. In all three of these contexts, [place] is a missing element, and not just saying any element, but a huge chunk of the picture that is missing. Once you start to think about all the problems that we have about land and space– the ecological crisis that we are in the midst of– you realize that these issues are not as disconnected as we often imagine; they are intertwined inside the racial imagination.

ERB: It seems that there are a lot of parallels between your work and that of some of the agrarian thinkers, particularly your Duke colleague Norman Wirzba.

WJJ: Yes! Norman and I, we’ve been talking about the parallel concerns we have and his very important work that tries to restore to the Christian imagination some sense of the earth. The difficulty is, I think, to know how to take the Earth seriously and our embeddedness in the earth, because most of us are caught within a couple of poor ways of imagining the world: the one is the prominence of the domination theory of creation, as so many Christian ecologists and theologians have brought to our attention – the earth is just a product, a token for our use, and God wanted it so. The other problem is that many people are blind to – and in fact are educated into a kind of blindness of – how we read the Bible. We read the Bible as though for the biblical figures, the earth, the ground, the animals are as inconsequential for them as they are for us. In fact, if we read the Bible and actually understood how significant the earth, animals, plants are within scripture, it would mean something very different to us. So many people, when they read the Bible, they look at all of that as quite inconsequential to what’s actually going on [in the biblical story]. And so part of the deep problem is that the quality of one’s Christian life is really tied to how one lives in space, in place, and how one understands our connections to our lives to Earth and to animals.

ERB: Let’s jump ahead to the book’s conclusion, which for me was probably the most striking part of the book. We here at Englewood Christian Church have come to value conversation as a practice and in fact, being in conversation is our primary way of being together as a church. I was struck by this idea that you present in the last couple of pages of the book, of the hope of reimagining the ways that we think about space and configure ourselves spatially, and the roles of the diversity of gifts and callings as significant to that conversation and discernment. Can you maybe flesh that out and say a little bit more about what that sort of conversation that you imagine might look like?