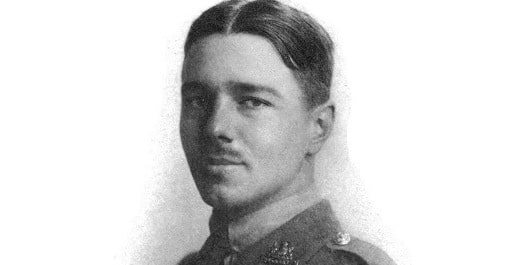 Wilfred Owen (18 March 1893 – 4 November 1918) was an English poet and soldier. He was one of the leading poets of the First World War. His war poetry on the horrors of trenches and gas warfare was much influenced by his mentor Siegfried Sassoon and stood in contrast to the public perception of war at the time and to the confidently patriotic verse written by earlier war poets such as Rupert Brooke.

Owen was born on 18 March 1893 at Plas Wilmot, a house in Weston Lane, near Oswestry in Shropshire. He was the eldest of Thomas and (Harriett) Susan Owen (née Shaw)’s four children. When Wilfred was born, his parents lived in a comfortable house owned by his grandfather, Edward Shaw. Owen discovered his poetic vocation in about 1904 during a holiday spent in Cheshire. He was raised as an Anglican of the evangelical type, and in his youth was a devout believer, in part thanks to his strong relationship with his mother, which lasted throughout his life. His early influences included the Bible and the Romantic poets, particularly Wordsworth and John Keats.  (via Wikipedia)

Parable of the Old Men
and the Young

So Abram rose, and clave the wood, and went,
And took the fire with him, and a knife.
And as they sojourned both of them together,
Isaac the first-born spake and said, My Father,
Behold the preparations, fire and iron,
But where the lamb for this burnt-offering?
Then Abram bound the youth with belts and straps,
And builded parapets and trenches there,
And stretched forth the knife to slay his son.
When lo! an angel called him out of heaven,
Saying, Lay not thy hand upon the lad,
Neither do anything to him. Behold,
A ram caught in a thicket by its horns;
Offer the Ram of Pride instead of him.
But the old man would not so, but slew his son. . . .