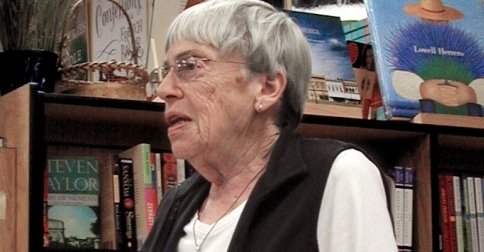 This week marks the birthday of novelist Ursula Le Guin.  In honor of the occasion, we offer this introductory reading guide to her work.

Rocannon’s World is the first novel by American writer Ursula K. Le Guin. It was published in 1966 as an Ace Double, along with Avram Davidson’s The Kar-Chee Reign,following the tête-bêche format. Though it is one of Le Guin’s many works set in the universe of the technological Hainish Cycle, the story itself has many elements of heroic fantasy. The hero Gaveral Rocannon encounters lords who live in castles and wield swords, and other races much like fairies and gnomes, in his travels on a backward planet. The word “ansible” for a faster-than-light communicator, was coined in the novel. The term has subsequently been used throughout the canon of science fiction. (Description via Wikipedia)