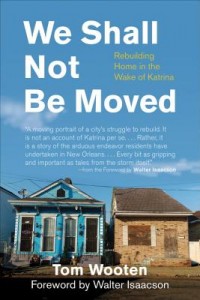 We Shall Not Be Moved: Rebuilding Home in the Wake of Katrina

Some of the most encouraging stories to emerge in the aftermath of Hurricane Katrina in 2005 had to do with the way Christians from across the country poured into Louisiana and Mississippi by the busload, seeking to serve. This continued, against all odds, for months and even years following the disaster.

Also well known are the stories of the failures of political bureaucracies, which prompted one rapper to accuse the nation’s president of apathy towards the suffering of African–Americans in New Orleans. Meanwhile, a Hollywood star’s efforts to introduce the latest in green housing technology in a particularly vulnerable neighborhood received much publicity as well.

Less known are the stories of what the actual residents of New Orleans — in neighborhoods like Hollygrove, Lakeview, Village de l’Est, Broadmoor, and the Lower Ninth Ward — have done to bring their neighborhoods, and the city itself, back to life. In We Shall Not Be Moved: Rebuilding Home in the Wake of Katrina, author Tom Wooten, a Harvard graduate who moved to New Orleans following the storm, introduces us to the real heroes in the aftermath of the floods.

These heroes include men and women both young and old, including clearly identified leaders and those who rose to the occasion at the eleventh hour. Working through neighborhood associations and community development corporations, many of these heroes worked diligently to make their communities livable again, convincing former neighbors to return and rebuild, accepting the sure challenges doing so would entail.

Interestingly, people of faith play a central role in the recovery of many of the neighborhoods profiled in the book, and are all portrayed in a very positive light. For instance, in Village de l’Est, we meet Father Vien, a Vietnamese Catholic priest who instigated efforts to launch a redevelopment plan for the neighborhood and to oppose a large landfill planned for a an adjacent area. Meanwhile, in Hollygrove, we’re introduced to Kevin Brown, who leads Trinity Christian Community, a youth-focused urban ministry. “My end is community transformation,” Brown says, “but what I want to see is a bunch of Christian leaders transform the community.” Elsewhere, in Lakeview and Broadmoor, we see how Episcopal churches lend their facilities to provide much-needed meeting space for neighborhood associations and to provide air-conditioned respite for those working hard to rebuild their homes under the merciless New Orleans sun.

As Walter Isaacson writes in the foreword, the stories in We Shall Not Be Moved show how decentralized New Orleans’ recovery became, and that it was only when neighborhoods rallied together to fend for themselves that positive change began to occur. As story after story makes clear, official urban planning initiatives – led, in many cases, by “experts” from outside the city – often got in the way of efforts that had already been undertaken by city residents to bring their neighborhoods back to life. Ideally, however, as Isaacson writes, “Neighborhood-driven efforts should exist in partnership with government, not in place of government.”

As the book comes to a close, it becomes clear that the long, slow, difficult work of rebuilding homes and neighborhoods takes its toll. Some neighborhood leaders step aside, while others simply slow down, but continue to press on. The task of rebuilding New Orleans will not end anytime soon.

For those of us who follow Christ, and who recognize that he calls us to seek the flourishing of the cities where he has placed us, we’d do well to heed the reminder that while short-lived bursts of compassion are good, cultivating faithfulness in one place over an extended period of time is how we truly love both our neighbors and our neighborhoods.

Tim Høiland is a writer, editor, and connector for the common good. Born in Guatemala City, he now lives in Phoenix. Learn more at tjhoiland.com.