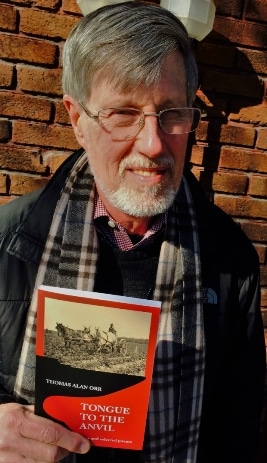 In Love of Place

If left on my own, I find that I tend to be very demanding when reading poems. I’ll read them in handfuls on a whim, but not carefully—it’s the casual, uncommitted kind of reading with eyes sweeping from one line break to the next without really ‘catching.’ I’ll skim. I’ll find myself in love with the idea of poetry, and yet not actually interested in the sometimes bare realities of it.

With this habit ingrained in the back of my soul, I brushed my hands over a few pages of Orr’s work. And I paused. And then I read the poems again.

They’re poems of place, foremost—earthy, conversational, and sometimes uncomfortably technical as Orr shares the world of tri-axles and dropped cotter pins. Having grown up in the Midwest, I found myself awed by the precise beauty of it, by the realms of knowledge that were so near and yet so outside my reach. These are poems that tell of what the world is and how it works, and yet there is more to them; they convey an otherworldly sort of truth in between the taste of sweat and dust.

He wears a hat made of sky

and walks his cougar through the corn.

Place is not a simple, physical thing. Orr’s poetry is also in appreciation of memory, of not just where one was raised but how.

And he has an eye for everyone: the town drunk, the piano mover, the unchurched and the churched. Perhaps it’s the way he tells stories that really drew me in. There was no poem about ‘nothing,’ no piece that felt like empty words trying to create a meaning that wasn’t there. Tongue to the Anvil has breath in it—the light touch of humor when the improbable really happened, the slight sting of contempt or bitterness hidden in the desire for life, and the bare-boned struggle for hope.

Occasionally I would catch myself reading more critically, almost in the voice of my old professors—streamline this section more, make it really sing, make it sound less like prose. While this collection quite often demonstrates Orr’s mastery over language, it’s sometimes inconsistent. Perhaps I wouldn’t have noticed the poems that moved with a few clunky steps if the rest hadn’t taken hold of me so strongly.

Nevertheless, this might be a matter of personal taste. Besides, I would rather see the side effects of pieces that are accessible, not of condescending and arrogant poetry. These feel intimate and spoken, almost familiar:

A straight line is a farmer’s friend,

the acres cornered and the crop rows

the road and horizon, where wind

is making music for those who hear. (21)

Though there were poems I’m sure I couldn’t fully understand, I still felt like they had meaning I could grasp at. Tongue to the Anvil will push and insist that you see what is around you in a new way. The simple, common things were labored over. The place you’re in is alive and constantly changing. The people you know are complex, but maybe more straightforward than you thought.

And the wind off the sea was

a voice familiar to us,

the breath of holy vowels

unlocking words in a tongue we thought

we knew, until we heard them again