To Touch and Taste Paradise

In my advanced English class at high school in the early 1990s, I had a close brush with John Milton. Our year’s cohort were split into two classes, one spent four months working through Paradise Lost but my class dived into Wordsworth. Milton would wait. Perhaps that is providence as his poetry speaks directly to 2020. Paradise Lost casts the creation story as epic apocalyptic theatre. There is God and his angel armies, satanic pandemonium, wars in heaven, universal creation and chaos; tectonic plates pushing against each other in ways that humans can barely comprehend. Holding all of this in tension, Milton places at the centre of his story human choices that shape destiny. It’s the same today, we cannot control global political, economic, and environmental forces, but this is the theatre in which we make our choices and forge our futures.

In Milton’s time, his theatre was fashioned by a history of sectarian prejudice and civil war, failed republics, reactionary politics and a plague. This context is the jumping off point for Thom Satterlee’s historical novel God’s Liar. Satterlee’s shapes his tale around the time Milton spent in a village called Chalfont Saint Giles in 1665, avoiding the bubonic plague that raged in London. Blind and reliant on the care of his third wife, Milton used this time to complete Paradise Lost. To achieve this, according to the contemporary biography of Milton by John Toland, he received help from an amanuensis. An amanuensis is a type of literary secretary who takes dictation or copies manuscripts.

In God’s Liar by Thom Satterlee, this amanuensis is a character named Reverend Theodore Wesson; a young, ambitious curate for the local parish. The novel is Wesson’s story, Milton is only a supporting character. Satterlee sets his novel in the course of a day in 1695, where an aged Wesson is confronted by John Toland researching his Milton biography. Through use of flashback and diary entries, Wesson cautiously conveys his personal history of 1665 while trying to protect himself from damaging scandal.

Wesson is a habitual liar, a priest by trade but not conviction, hoping to build a career and a reputation in an Anglicised form of prosperity church where the main rule is that everyone is out for themselves. Milton, and his wife Elizabeth, act as a catalyst that forces Wesson to confront his failings, conflicts and questions about God’s providence. They introduce him to a local Quaker sect who show Wesson what it means to live by Spirit led, honest conviction. Here is where it makes sense for Satterlee to explore his themes in the historical context of Restoration England. In Wesson’s context, an Anglican choosing the Quaker way of desiring intimate, direct experience of God meant the threat of ruin, social stigma and potentially prison. Today, a friend would take him to an Alpha course.

The strength of God’s Liar is the character work that Satterlee does with Wesson. Wesson is an engaging presence as a fallible narrator both as a naïve curate and a gout ridden rector trudging through the motions of daily office. The nuance and shade that the author brings to his main character also extends effectively to the two visions of religious life presented. All choices presented to Wesson contain life and death. In style terms, Satterlee’s greatest strength is his briskness. He is adept at keeping things moving forward.

However, God’s Liar suffers from a form of Downton Abbey syndrome where characters speak and think anachronistically, but whereas Downton revels in the detail that brings early 20th Century England to life, the scenery in Satterlee’s theatre is cardboard cut-out. Specifically, Chalfont Saint Giles should be a living character in this book and it is not. If an author is invoking Eden by referencing Paradise Lost, they should be able to write on nature with a level of detail and soul. Many of the characters in God’s Liar are fighting for the soil of England, but to capture that drama, a writer needs geography as well as history.

What is lost here is a rounded world in which the action of the novel takes place. There are too many rough edges in Satterlee’s style; too many times where you can see the joins. That means when the action comes in the final third of the book and Wesson’s choices have to be made, the weight of those choices feel insubstantial. The novel’s ending should be devastating, but nothing hits in the way it should. Satterlee’s brisk pace gives way to a series of rushed conclusions that sell out every character in some way apart from Wesson and Milton’s wife. God’s Liar has the feel of a difficult second novel that works as a pitch and as a treatment, but not as a fully fleshed book.

God’s Liar suggests Satterlee is a literary-minded author with a pulp fiction skillset. Very few authors combine these traits together successfully, so perhaps Satterlee has choices to make going forward. One option would be to embrace his skillset. If, for instance, Satterlee took his Wesson and Milton characters, contemporized them as a wannabe megachurch leader and slam poet from Queens, and gave them a murder mystery to solve, a good time would be had by all. However, if Satterlee wants to embrace a more literary route; he has the skill to build characters, but he needs to invest in shaping environments. Readers can’t understand what is being lost if they cannot touch and taste the paradise. It’s a small choice in the epic apocalyptic theatre that 2020 has become, but small choices are what shapes destiny. 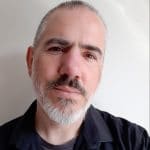