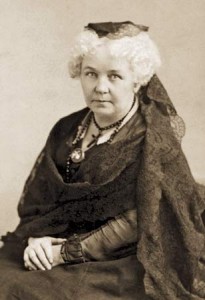 Today marks the 110th anniversary of the death of suffragette Elizabeth Cady Stanton.

Toward the end of her life, Stanton headed a project entitled The Woman’s Bible, published in 1895.  Although this Bible was not a paragon of biblical scholarship (many of the best women biblical scholars of the time were afraid to work on this project because it might threaten their academic status in male-dominated universities), it was the first prominent work to question the notion of “biblical womanhood.”

In the 1890’s Elizabeth Cady Stanton and a small group of contributors produced The Woman’s Bible.  They excerpted and commented on those portions of the Bible in which women appear — or are conspicuously absent.  In their comments, the authors attacked both the male bias that had distorted the interpretation of the Bible and the misogyny of the text itself.  Sharp and outspoken in its content, witty and pungent in its style, The Woman’s Bible remains a fascinating work.  Many of its observations, which seemed so daring at the time, have since come to be widely held, even treated as obvious.
(from the Introduction to the Women’s Bible Commentary, Newsom, Ringe, Lapsley, Eds.)

The Woman’s Bible was the first in a long tradition of works questioning the meaning of biblical womanhood. Rachel Held Evans’ soon-to-be-released A Year of Biblical Womanhood is one of the latest books in this tradition, and the lightheartedness with which it raises these questions makes it a thoroughly enjoyable read!

In remembrance of Elizabeth Cady Stanton, we are pleased to offer her autobiography The Woman’s Bible as our Freebie of the week…