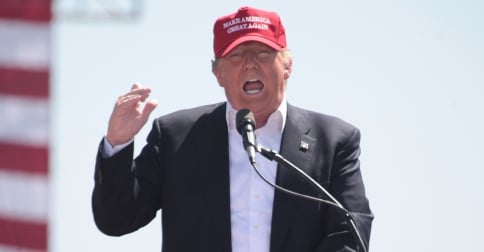 The Unexamined Life and Politics of Donald Trump

Donald Trump’s inclination to not read books has been highlighted in two recently published articles. Tony Schwartz, the ghostwriter who collaborated with Trump on his bestselling book, The Art of the Deal, was recently interviewed in The New Yorker, expressing his deep regrets for “presenting Trump in a way that brought him wider attention and made him more appealing than he is.”

Schwartz emphasized Trump’s inability to concentrate and his apparent lack of an attention span, and then proceeds to draw a connection between that and Trump’s seeming avoidance of reading books:

Schwartz believes that Trump’s short attention span has left him with “a stunning level of superficial knowledge and plain ignorance.” He said, “That’s why he so prefers TV as his first news source—information comes in easily digestible sound bites.” He added, “I seriously doubt that Trump has ever read a book straight through in his adult life.” During the eighteen months that he observed Trump, Schwartz said, he never saw a book on Trump’s desk, or elsewhere in his office, or in his apartment.

Other journalists have noticed Trump’s apparent lack of interest in reading. In May, Megyn Kelly, of Fox News, asked him to name his favorite book, other than the Bible or “The Art of the Deal.” Trump picked the 1929 novel “All Quiet on the Western Front.” Evidently suspecting that many years had elapsed since he’d read it, Kelly asked Trump to talk about the most recent book he’d read. “I read passages, I read areas, I’ll read chapters—I don’t have the time,” Trump said.

In a similar vein, a Washington Post article by Marc Fisher that went live online yesterday, also noted Trump’s aversion to reading, but framed this characteristic against the reading habits of previous presidents. Fisher notes that there have been several presidents over the last century — most notably Eisenhower — who “preferred to have issues presented to them in short memos or orally.” History has indicated that one does not have to be an extensive reader to be elected president or to serve well in the Oval Office.

In the complex, global economy of the twenty-first century, however, I am skeptical that a candidate like Trump who combines a minute attention span with an aversion to habits of careful reading can participate meaningfully in the formation of policy that serves the best interests of our nation or the global economy. In my recent book Reading for the Common Good, I explain why reading carefully is essential to healthy political participation, for voters, as well as for candidates and elected officials at all levels of our American political system. I highlight the political dangers of not reading well, dangers which are already emerging in Trump’s rhetoric:

Reading .. can help us to engage a wide range of policies in meaningful and helpful ways. To be engaged in the world in transformative ways, we must understand the history of an issue or a particular policy position. We can ask: what are the forces that have driven this policy to develop into its present form? If we perceive threats to legislation that we believe is beneficial, who are the parties behind these threats, why are they challenging the laws, and how can we best engage them? Without a robust commitment to reading, we are perhaps more likely to stereotype the opposition, assume the worst of them and make sure that the answers we find only confirm those assumptions.

I am particularly stunned that Christians whose life is rooted in the reading of scripture, and the call to discern faithfully and humbly the reconciling way of Jesus in the present age, could support a candidate who so adamantly resists these practices of reading and reflection. I am most perplexed by Eric Metaxas’s endorsement of Trump. Metaxas, who founded the “Socrates in the City” program, which identifies its mission with the Socratic tagline “The unexamined life is not worth living,” and yet Metaxas casts his lot with one who by his own admission (and by all accounts of observers) embodies precisely the unexamined life. If the unexamined life is not worth living, then why in the world would we advocate for a leader who not only personally embodies this sort of life, but whose political vision is deeply rooted in it?

I’m not going to tell you that you should vote for Hillary Clinton, but I am deeply convinced that when Christians endorse and vote for the unexamined politics of Donald Trump, we do so at the peril of our faith, our nation and indeed the world.

C. Christopher Smith is founding editor of The Englewood Review of Books, author of the newly released book Reading for the Common Good, and co-author (with John Pattison) of Slow Church: Cultivating Community in the Patient Way of Jesus (IVP Books, 2014).