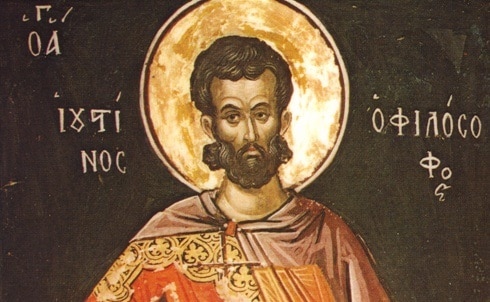 This week marks the feast day of St. Justin Martyr …

The Testimony of Justin Martyr
to Early Christianity
by George T. Purves

Justin Martyr (c. 100 – c. 165) was an early Christian apologist and philosopher. Most of his works are lost, but two apologies and a dialogue did survive. The First Apology, his most well-known text, passionately defends the morality of the Christian life, and provides various ethical and philosophical arguments to convince the Roman emperor, Antoninus, to abandon the persecution of the Church. Further, he also indicates, as St. Augustine would later, regarding the “true religion” that predated Christianity, that the “seeds of Christianity” (manifestations of the Logos acting in history) actually predated Christ’s incarnation. This notion allows him to claim many historical Greek philosophers (including Socrates and Plato), in whose works he was well studied, as unknowing Christians.

The Testimony of Justin Martyr
to Early Christianity
by George T. Purves