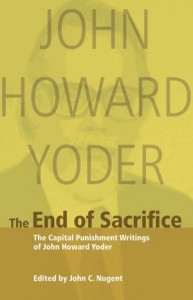 The End of Sacrifice:

John Howard Yoder’s work is well known for its emphasis on non-violence, and yet until recently little was known about his writings on the important issue of capital punishment. He had written a number of pieces on the topic, but they were scattered in Mennonite publications with limited distribution, in a section of an evangelical book on the issue and in unpublished papers.  Thankfully, Yoder scholar John Nugent – the author of The Politics of Yahweh, one of our 2011 Englewood Honor books – has collected these writings in one new book entitled, The End of Sacrifice.  The book’s title is drawn from Yoder himself, as Nugent notes in the introduction:  “It is the clear testimony of the New Testament, especially of the epistle to the Hebrews, that the ceremonial requirements of the Old Covenant find their end – both in the sense of fulfillment and in the sense of termination – in the high-priestly sacrifice of Christ.”

The End of Sacrifice is an important contribution to rapidly-expanding body of research rooted in Yoder’s work, but it is also a very significant contribution to the ongoing public conversation in the United States about capital punishment.  Yoder develops his position against the death penalty from a variety of angles over the course of the book (Readers must bear in mind that the pieces in this collection span almost four decades).  The early pieces in the book were written for general audience publications and deal with basic questions.  One of the most straightforward introductions to Yoder’s position is the latter part of Chapter Three “Capital Punishment and Our Witness to Government,” which captures a Q&A session that he had with students at Bethel College in Northern Indiana and covers the most familiar questions that might be raised by Christians about an anti-death-penalty position like Yoder’s.

The heart of the book is Chapters Four and Five. Chapter Four consists of the arguments that Yoder made in a written debate with Wayne House that was previously published in the book The Death Penalty Debate: Two Opposing Views of Capital Punishment (Word Books 1991).  In Chapter Five, “You Have it Coming: Good Punishment,” the volume’s most technical work, Yoder approaches the topic – not as a theologian – but from the angle of sociology and public policy.  In this chapter, he deals at length with the important work of Rene Girard on violence and scapegoating. Yoder affirms the bulk of Girard’s mimetic theory, noting that “The first time I began appealing to the Girardian perspective was when I was assigned to seek to interpret why mainstream American society is so solidly devoted to the death penalty.” (227). He does, however, also identify four “gaps” in Girardian theory.

When people come to me wanting to explore questions related to capital punishment, The End of Sacrifice is the book to which I will point them.  It is an essential work for Christians desiring to think theologically about one of the most pressing social issues of our time.

C. Christopher Smith is the Editor of The Englewood Review of Books and author of the recent ebook The Virtue of Dialogue: Conversation as a Hopeful Practice of Church Communities.  He blogs about his forthcoming book (co-written with John Pattison) at SlowChurch.com.