This is the second in an on-going series of “playlists,” in which we recommend books around a particular theme.

“Making a mixtape (or playlist) is the opposite of indifferent. It’s heartfelt, purposeful — often a subtle form of flirtation. … [The playlist] is a way of making yourself known, an interpersonal form of show business, of making news, of replicating sounds and words you find important. It’s like poetry, because poetry is what you can’t say in any other way.”
– David Dark, The Sacredness of Questioning Everything
(Our 2009 Book of the Year. Read our Review…)
*** Watch for more ERB playlists in the coming weeks and months, and for a forthcoming essay on playlists as a way of doing theology. 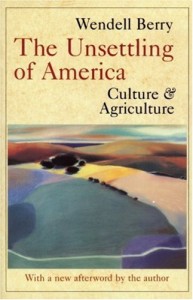 “Agrarianism,” Wendell Berry once said, “is a habit of mind.” This habit of mind “is not so much a philosophy as a practice, an attitude, a loyalty and a passion – all based in close connection with the land. It results in a sound local economy in which producers and consumers are neighbors and in which nature herself becomes the standard for work and production.”  This way of thinking, this standard of living is one I’ve been trying to understand as a lived reality for over a decade now. Through this time and work I’ve collected a large number of books that have been my guides, many on the side of theory, several on the side of practice.  Here I want to offer a list, by no means comprehensive, of a few of the books I’ve found most helpful.

Wendell Berry’s The Unsettling of America is perhaps the most important book of contemporary agrarianism.  Without Wendell Berry agrarianism as it stands would not exist and this book set the stage for everything that came after in Berry’s work.  If someone asks me for one book to read on agrarianism, this is the one I recommend not only because it covers so much ground with so much wisdom, but also because if you The Unsettling of America you will inevitably want to read more.

Contemporary agrarianism didn’t come from no-where—there are a host of writers who formed the groundwork for contemporary discussions and returning to these writers it is amazing how prescient some of their arguments are.  The agrarian classics I’d put on a must read list include Tree Crops by J. Russell Smith, Farmers of Forty Centuries by F.H. King ( get a free ebook edition when you sign up for the weekly ERB email digest), The Soil and Health by Sir Albert Howard, and The Holy Earth by Liberty Hyde Bailey.

The Books I Go Back To

Life is A Miracle is Wendell Berry’s response to E.O. Wilson’s tragedy of a book Consilience. The positive outcome from Wilson’s book is that it resulted in one of Berry’s best sustained reflections on agrarian values.  Particularly helpful is Berry’s critique of scientific ideology and specialization within the academy.

Living at Nature’s Pace is a collection of agrarian essays by Gene Logsdon.  Logsdon has written several practical guides to farming including his indispensible and out of print A Gardener’s Guide to Better Soil, but this book takes a more theoretical approach.  Particularly powerful is Logsdon’s suggestion in the introduction that farms are the monasteries to the new Dark Ages.

The One Straw Revolution by Masanobu Fukuoka is a revolutionary introduction to “do nothing farming.”  Fukuoka, an incredibly successful farmer in Japan, lays out a vision for farming where nature does most of the work and the farmer’s job is to get out of the way.  This book, influential in the early days of the organic movement, has recently been republished with a preface by Wendell Berry and introduction by Diet for a Small Planet author Francis Moore Lappe.

Agrarianism is nothing without a realization that our lives are dependent upon the soil.  Understanding the soil should perhaps be the primary aim of our education, certainly more important than most subjects taught in school.  The best introduction I know to the nature of the soil is Teaming with Microbes: A Gardener’s Guide to the Soil Food Web.  Industrial soil science centers on a chemical approach to fertility, but Teaming with Microbes shows that the soil is a biological reality that must be treated as such.  The divide between animal and plant agriculture begins to disappear as we realize that cattle ranchers should think of themselves as grass-farmers and vegetable growers realize that they are really microbe ranchers.

Slow Money is a collection of essays that asks how we could develop a money economy that respects the fertility of the soil.  Written by venture capitalist Woody Tasch, this book questions the standard models of economic growth and takes to task industrial environmentalists like Adam Werbach who have tried to work with companies like Wal-Mart.  Tasch argues that we must measure economic success not only by monetary profits, but by how well an endeavor builds sustainable soil fertility.  Written just before the current economic crisis this book is amazing for its predictions of the unsustainable nature of growth not tied to the soil.

There are a host of books that could fill out this list so I’m going to refer to a couple of books to which I keep returning.  How to Grow More Vegetables by John Jeavons is a classic and was recommended to me as the book by the best farmers I know.  Jeavons offers a host of useful tables and garden plans based on his extensive research and experience.

Eliot Coleman is one of the best farmers in the country and his Four Season Harvest is the most up to date statement on his farming methods.  Coleman grows a wide variety of vegetables year around in Maine.  If that isn’t a reason to hang on his every word I don’t know what is.

Gaia’s Garden by Toby Hemenway is a beautifully illustrated guide to permaculture farming.  If we are going to grow a sustainable future, the kinds of biological thinking laid out in this book are essential.  The book has extremely helpful tables of plants and their purposes and approaches the garden as an ecosystem in a way that few books do. It is a book that will make you want to go outside and reimagine the landscape of your place.

On the animal side there is one book that everyone should own: Feeds and Feeding by Frank B. Morrison.  This book not only shows what you should feed every kind of livestock, but also talks about basic animal care.  What’s wonderful is that this book was written before industrial agriculture so it assumes things like that your pigs will be foraging.  Interestingly, caution must be used while following Morrison’s mixing guidelines for animal feeds because modern feed stuffs like corn and soybeans are not as nutrient rich as they were in Morrison’s day.  The book is out of print, but can be found fairly easily. Get your copy before this essential resource disappears.

I’m sure there are many other books I’m forgetting and many more with which I’m simply unfamiliar.  Please share your essential agrarian reads in the comments.

Ragan Sutterfield is a writer in Little Rock, Arkansas.  He is the author of Farming as a Spiritual Discipline and a forthcoming book Cultivating Reality.  Sutterfield raised livestock for several years, started a market garden for troubled youth, and has been involved in numerous projects to develop local food economies.  His current work centers on writing and preparing for ministry in the Episcopal Church.

Have an idea for a thematic playlist that would be of interest to ERB readers?
We’re looking for catchy playlist ideas to run in the near future. Contact us with your best idea(s)…