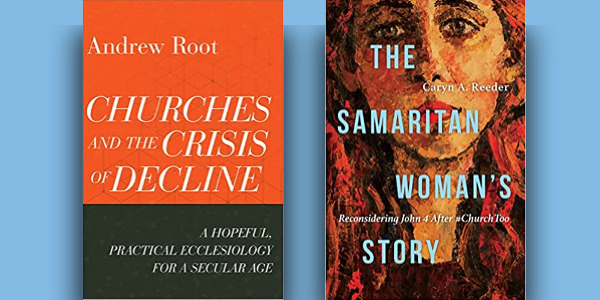 Here are some excellent new theology books * that will be released in February 2022 :

Churches and the Crisis of Decline: A Hopeful, Practical Ecclesiology for a Secular Age

Congregations often seek to combat the crisis of decline by using innovation to produce new resources. But leading practical theologian Andrew Root shows that the church’s crisis is not in the loss of resources; it’s in the loss of life–and that life can only return when we remain open to God’s encountering presence.

This new book, related to Root’s critically acclaimed Ministry in a Secular Age project, addresses the practical form the church must take in a secular age. Root uses two stories to frame the book: one about a church whose building becomes a pub and the other about Karl Barth. Root argues that Barth should be understood as a pastor with a deep practical theology that can help church leaders today.

This book pushes the church to be a waiting community that recognizes that the only way for it to find life is to stop seeing the church as the star of its own story. Instead of resisting decline, congregations must remain open to divine action. Root offers a rich vision for the church’s future that moves away from an obsession with relevance and resources and toward the living God.

Tradition and Apocalypse: An Essay on the Future of Christian Belief

In the two thousand years that have elapsed since the time of Christ, Christians have been as much divided by their faith as united, as much at odds as in communion. And the contents of Christian confession have developed with astonishing energy. How can believers claim a faith that has been passed down through the ages while recognizing the real historical contingencies that have shaped both their doctrines and their divisions?

In this carefully argued essay, David Bentley Hart critiques the concept of “tradition” that has become dominant in Christian thought as fundamentally incoherent. He puts forth a convincing new explanation of Christian tradition, one that is obedient to the nature of Christianity not only as a “revealed” creed embodied in historical events but as the “apocalyptic” revelation of a history that is largely identical with the eternal truth it supposedly discloses. Hart shows that Christian tradition is sustained not simply by its preservation of the past, but more essentially by its anticipation of the future. He offers a compelling portrayal of a living tradition held together by apocalyptic expectation–the promised transformation of all things in God.