1. Many of the earliest novels weren’t called novels.

The history of the novel—a long narrative written in prose, focusing on the life of an ordinary individual—is long and complicated. For a number of reasons, including a strong strain of Puritan disdain of anything “fictional,” some of the earliest writers of these works called them “histories” or “memoirs” or “letters.” The hard categories of fiction and non-fiction were much blurrier, as a result, a fact that has interesting implications for us living in a “post-truth” age increasingly defined by misinformation. The word “novel” was in wide circulation, but it was generally used by disreputable writers (many of them women) who were creating scandalous tales of amorous intrigues. Respectable authors who wished to be esteemed in literary circles would hardly want to be associated with such lowbrow entertainment, though they were eager to innovate and adapt the emerging form for higher purposes.


2. “Purity culture” is a predominant theme running through many important novels since the beginning of the novel.

One of the first novels to be considered such, Samuel Richardson’s 1740 Pamela, is subtitled “Virtue Rewarded.” Thus, begins a centuries-long train of novels centering on the chastity of female characters and the consequences for their success or failure to remain “pure.” Notably, even before our concepts of consent and rape were understood as they are today, these writers were grappling with the gray areas: when is “seduction” really force, is a woman who is coerced into sex no longer pure? These are questions novelists have been struggling with—like the rest of us—throughout the modern age when individual will and conscience came to the fore or our understanding of ourselves. These questions are at the center of my final two entries in this series, Thomas Hardy’s Tess of the D’Urbervilles and Nathaniel Hawthorne’s The Scarlet Letter, which will release next year.


3. Jane Austen was one of the first to call her works “novels.”

When Sense and Sensibility, the first of Austen’s works to be published (in 1811) the title page read, “Sense and Sensibility: A Novel,” an early example of novelist proudly owning her work as a novel. But, before we give Austen too much credit for her boldness (given the history above regarding the disreputable state of novels), we must note that she published anonymously, as she did her next three novels. Only in 1817, when her brother published Persuasion and Northanger together, a few months following her death, was Austen revealed to be the author of these and her previously published works.

Some of the confusion about Jane Eyre can be attributed to the book’s original title, which was Jane Eyre: An Autobiography, a common device used by early novelists, as explained above. And because Bronte adopted the pseudonym Currer Bell, there was no way for the novel’s first readers to know that it was not a true story. And Jane Eyre does reflect a number of real-life experiences of Bronte’s, including her harrowing days at a boarding school for the daughters of clergymen and an infatuation she had for an older man. Good writers write what they know, after all. This is part of what makes the narrative seem so real (despite its Gothic Romanticism!). But Bronte objected to being identified with her character rather than being understood as an artist who had created a character. She was mortified when fellow author William Makepeace Thackeray once introduced her at a party as “Jane Eyre.” Nevertheless, she would spend the rest of her life dispelling the myth that she and her character were the same.


5. Heart of Darkness draws heavily on actual events in history and in Joseph Conrad’s life.

Like Jane Eyre, Heart of Darkness reflects the real-life experiences of its author. Originally from Poland, Joseph Conrad eventually became a naturalized British subject and a Master for the British Merchant Navy. In 1890, he took a position with a Belgian trading company as a steamboat captain on the Congo River, a voyage that exposed him to many of the stark realities depicted in Heart of Darkness. The setting of the primary action in the story is what is today called the Democratic Republic of the Congo. From 1885 to 1908, this area was controlled by Belgium’s King Leopold II in what can only be described as a brutal reign of terror over the native people, one of several kinds of terrors meant by the title phrase “heart of darkness.”


6. Classic literature can reveal powerful truths about marginalized people (and those who marginalize them).

Classic literature is experiencing pushback these days because it overrepresents the voices of those who have been historically in power. Although we can’t go back in time and resurrect the oppressed and disenfranchised voices of the past, we can and should read the classics with eyes opened to what is left out of these stories, along with what’s put in. That’s why I engage in my edition of Heart of Darkness with Chinua Achebe’s criticism and recommend his novel, Things Fall Apart, which portrays colonization from the point of view of the colonized rather than the colonizers. At the same time, works that achieve the status of classic do so because the speak to universal human questions and concerns. And these inherently include (even if subtly) the status of the marginalized. The slave trade lurks behind Austen’s world, for example. The imprisoned, brown-skinned woman in Jane Eyre raises more questions than any other in the novel. And, of course, Frankenstein depicts an outcast who speaks for all who are hated and despised simply for existing.


7. There are two versions of Frankenstein.

The story of how Frankenstein came to be is almost as legendary as the novel itself, the result of a challenge among Mary Shelley and her friends to create ghost stories while stuck inside during dreary weather. The story Shelley first dreamed up (literally) as a teenager in 1816 was published in 1818. In 1831, Shelley, widowed for some years and having become less radical than in her earlier years, substantially revised and published a new version of her novel. Although the plot remains essentially the same, the chapters differ, and the revisions in whole present a more moral and cautionary telling, removing some of the rawness and edge of the earlier version. Each is wonderful in its own way; together they offer insights into the growth of an author and a person.


8. By the way, if you know Frankenstein only from popular culture, you are in for a big surprise when you read the novel.

The more I encounter people who “love” Jane Austen, the more I am realizing that they love the movies. But if you’ve never read the actual books, you probably have no idea that Austen is deeply anti-romantic, steeped in satire, and as perceptive a moral philosopher as you will find. Love, romance, and family ties in the novels are merely the stage upon which Austen brilliantly acts out the human drama and points us (through her brilliant wit) toward virtue, or human excellence. Her worldview thoroughly and profoundly reflects her Anglican Christianity. Austen’s word craft is stunning, something the movies hint at, but which must be read to be truly appreciated.

Austen worked on the story that would eventually become Sense and Sensibility for about sixteen years. She also steadily worked on other novels during those years. She was always scribbling, often writing in secret on small pieces of paper that she could quickly slip out of sight if anyone entered the room. Austen was 35 when Sense and Sensibility was published (with the heavy-handed help of her brother’s purse). Because of her early death at age 41, numerous of her works were unfinished or published posthumously. But her painstaking devotion to craft is clear, as much a legacy to the world as are the novels themselves. 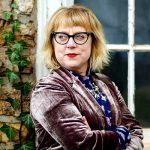 Karen Swallow Prior, Ph. D., is Research Professor of English and Christianity and Culture at Southeastern Baptist Theological Seminary. She is the author of several books including Booked, On Reading Well and her newest releases are Frankenstein: A Guide to Reading and Reflecting and Jane Eyre: A Guide to Reading and Reflecting. She and her husband live on a 100-year old homestead in central Virginia with sundry horses, dogs, and chickens. And lots of books.