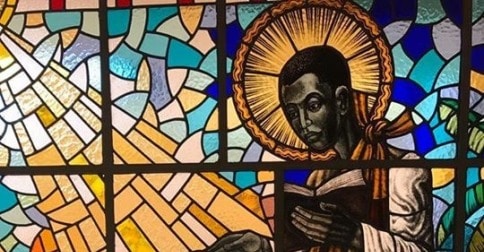 In honor of Black History Month, here are the stories of 10 African Saints. North American Christians know too little about the history of Christianity in Africa, so these stories are a great place for us to start learning!

If these saints were alive today, would they have dark skin and be recognized as black people? Perhaps, perhaps not. (See Was St. Augustine Black?)  But regardless these saints were all born in Africa, and played a vital role in the church on this continent.

Here are brief introductions to ten African saints (I use this term loosely to include other prominent women of faith, not just those who have been canonized by the Roman Catholic church) that you should be familiar with.

Publication in Britain of an 1875 letter purporting to be an invitation from the king of Buganda, Muteesa I, to send missionaries, resulted in the arrival of Alexander Mackay of the Anglican Church Missionary Society to Buganda in 1877. A group of French Catholic White Fathers, led by Père Simon Lourdel (Fr. Mapera) appeared two years later. Arab traders from Zanzibar had introduced Islam into the kingdom. This effectively led to a three-way religious struggle for political influence at the Buganda royal court.  By the mid-1880s, many had been converted by each of the three groups, and some of the converts held important posts at the king’s court.  Muteesa himself sympathized with Islam, but many prominent chiefs had become Christians.

Kabaka Mwanga II succeeded to the throne in 1884. He was concerned at the growing influence of Christianity and the rise of a new class of officials, distinct from the traditional territorial chiefs, who were educated, had a religious orientation, and wished to reform Ganda society.  The German annexation of what is now Tanzania sparked further alarm. A year after becoming king he ordered the execution of Yusufu Rugarama, Makko Kakumba, and Nuwa/Noah Serwanga, who had converted to Christianity. Encouraged by his prime minister, on 29 October 1885 he had the incoming Anglican bishop James Hannington assassinated on the eastern border of his kingdom. This may have been deliberately intended to ward off a potential British invasion.  Mwanga did, however, subsequently appoint several Christians to important military positions

In 1886 Mwanga ordered the executions of a number of his pages. Heike Behrend says they were both Christian and Muslim converts; other sources speak only of Anglican and Catholic victims, and mention the killing of Muslims as having occurred ten years earlier at the hands of Mwanga’s father Muteesa. Joseph Mukasa, a convert to Christianity who had deplored the assassination of Hannington, and had tried to protect the court pages, was the first to be executed on 15 November 1885:  this was at the instigation of the Katikkiro (prime minister) Mukasa, whose successor Joseph Mukasa was tipped to become king.  Then, between 25 May and 3 June 1886, a wider series of executions were carried out.  Mwanga instructed the killing of all the young men who disobeyed him – partly to satisfy the demands of the older chiefs. Twenty-two of the men, who had converted to Catholicism, were burned alive at Namugongo in 1886.

“The reasons behind the persecution are still heavily debated”, Behrend states.  Political factors certainly played a part. Those killed included minor chiefs, some of whom, such as Joseph Mukasa, were “the victims of particular grudges by their seniors … jealous that these up and coming young men would soon be ousting them from power”. Ward has argued that the motivation was the perception that “these Christians were rebels against the Kabaka, unwitting tools of foreign imperialism”.

A witness to the event, the French missionary priest Lourdel, considered that the principal cause was Mwanga’s feeling of being despised by the literate Christians who claimed a superior knowledge of religion. Lourdel gave as a secondary cause of Mwanga’s action “the impossibility of satisfying his shameful passions”.  Ward certainly notes that “the immediate cause of the killings was the refusal of the pages to engage in homosexual practices”. The king, who by tradition had the power of life and death over his subjects, was angered by this refusal to obey his wishes to have sex with him.

In Buganda certain forms of same-sex relations were institutionalised. Young men served in the royal courts and provided sexual services for visitors and elites. Marie de Kiewet-Hemphill concludes that the immediate pretext, if not the whole cause, was therefore the refusal of the pages to yield to Mwanga  Roland Oliver rejects resentment against Christianity as a sufficient reason, since it does not explain why Mwanga took action against these young men and not against prominent chiefs and women among the converts.  Sylvia Antonia Nannyonga-Tamusuza draws attention to the same point. J. P. Thoonen in his book on the question agrees with Kiewet-Hemphill’s analysis, while recognizing the existence of other political factors.  Particularly as some of those that renounced their faith were spared death.”

In the week leading to the executions, the Christian Matthias Gayinga rejected the sexual demands of Mwanga’s close friend, the Muslim Lutaya, to whom the king had sent him for that purpose. For this he was severely punished, though not killed. His gesture was described as a “splendid refusal” by the English missionary A. P. Ashe, who later said it set the spark for later events. This action was followed by the refusal of another convert, Anatole Kirrigwajjo, to accept nomination to a high post “which he could only exercise at the peril of his soul”.

While many of the Christian pages often arranged to be missing when Mwanga wanted them or refused his demands outright, one page Muwafi did comply. Mwanga is said to have caught another page teaching Christianity to Muwafi. He saw this as an attempt “to rob him of his favourite and so far always compliant toy by teaching him the religion which made them prefer death to submission to his shameful demands”. Mwanga summoned the pages and asked those who prayed to stand to one side. These, most of whom were between 15 and 30 years old, were then taken on a long journey to execution by being burnt alive. By displaying what courage Christianity demanded, they helped remove any notion that the new religion was inconsistent with traditional ideals of heroism.