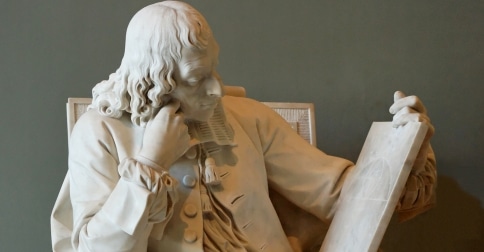 And although Pascal brings to his work the same powers which he exerted in science, it is not as a scientist that he presents himself. He does not seem to say to the reader: I am one of the most distinguished scientists of the day; I understand many matters which will always be mysteries to you, and through science I have come to the Faith; you therefore who are not initiated into science ought to have faith if I have it. He is fully aware of the difference of subject-matter; and his famous distinction between the esprit de géométrie and the esprit de finesse is one to ponder over. It is the just combination of the scientist, the honnête homme, and the religious nature with a passionate craving for God, that makes Pascal unique. He succeeds where Descartes fails; for in Descartes the element of esprit de géométrie is excessive.[C] And in a few phrases about Descartes, in the present book, Pascal laid his finger on the place of weakness.

He who reads this book will observe at once its fragmentary nature; but only after some study will perceive that the fragmentariness lies in the expression more than in the thought. The “thoughts” cannot be detached from each other and quoted as if each were complete in itself. Le cœur a ses raisons que la raison ne connaît point: how often one has heard that quoted, and quoted often to the wrong purpose! For this is by no means an exaltation of the “heart” over the “head,” a defence of unreason. The heart, in Pascal’s terminology, is itself truly rational if it is truly the heart. For him, in theological matters, which seemed to him much larger, more difficult, and more important than scientific matters, the whole personality is involved.

We cannot quite understand any of the parts, fragmentary as they are, without some understanding of the whole. Capital, for instance, is his analysis of the three orders: the order of nature, the order of mind, and the order of charity. These three are discontinuous; the higher is not implicit in the lower as in an evolutionary doctrine it would be.[D] In this distinction Pascal offers much about which the modern world would do well to think. And indeed, because of his unique combination and balance of qualities, I know of no religious writer more pertinent to our time. The great mystics like St. John of the Cross, are primarily for readers with a special determination of purpose; the devotional writers, such as St. François de Sales, are primarily for those who already feel consciously desirous of the love of God; the great theologians are for those interested in theology. But I can think of no Christian writer, not Newman even, more to be commended than Pascal to those who doubt, but who have the mind to conceive, and the sensibility to feel, the disorder, the futility, the meaninglessness, the mystery of life and suffering, and who can only find peace through a satisfaction of the whole being.

[C] For a brilliant criticism of the errors of Descartes from a theological point of view the reader is referred to Three Reformers by Jacques Maritain (translation published by Sheed & Ward).
[D] An important modern theory of discontinuity, suggested partly by Pascal, is sketched in the collected fragments of Speculations by T. E. Hulme (Kegan Paul).