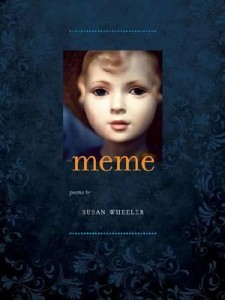 I used to think that words had something to do with information. I didn’t know quite how it worked, but I knew that when I saw words strung together the result would be a gain of information.  After reading Meme by Susan Wheeler, I know some things I didn’t know before, but I’m still not sure if it had anything to do with information.  I’ve always heard that poetry is supposed to “show, not tell” but I have never seen that idea on display as powerfully as Wheeler does in her new collection.

I get really excited to crack open a new book of poetry, so when I got email saying the book was available, I cleared my afternoon and devoured the book.  It took me less than an hour, so I spent the rest of my afternoon trying to figure out what I had just read.  Don’t get me wrong; Susan Wheeler is brilliant, and this book will make you rethink the role of language in your life.

I knew that a meme was an image or video passed around the Internet, a series of jokes that all work from the same theme or idea, but what I didn’t know was that the word meme actually exists IRL.  A meme can be anything, as long as it’s repeated enough that people begin to recognize it as a repetition.  In language, we would call them clichés, and I’m still not really sure what the difference is between a cliché and a meme, but I do know that as a poet I try to avoid them.  Actually, I abhor them.

So when I started reading the sequence entitled, The Maud Poems, the first few lines almost scared me off.

two shakes of a lamb’s tail

She was a real stickler.

Well, I couldn’t get it for the life of me.

The Maud Poems read like a script where all but one of the character’s lines have been deleted.  It also reads like an index of colloquialism, but, and this is a big but, it works.  Wheeler is not describing a place or a person but immersing you in it, leaving you to do the describing for yourself.  We don’t learn who Maud is, we don’t even have much of a narrative, but we meet her, we walk in her slippers, and in the process Susan Wheeler helps us to learn how to read again.