Well, as most people in the US know, this Sunday is Super Bowl XLVI …

and usually the Super Bowl is not something that we would comment on here at The Englewood Review of Books, but this year Indianapolis is hosting the Super Bowl and it’s a pretty big deal locally.   Even closer to home than Lucas Oil Stadium, the site of the Super Bowl game, is the Super Bowl Legacy Project which has been a $150 million redevelopment in the Near Eastside neighborhood where Englewood Christian Church is located.

I have written a new piece about the role of churches and conversation in the Super Bowl Legacy Project, that is currently featured on the front page of the Christianity Today website:

A Legacy in Indianapolis That Outlives the Super Bowl

Long before the NFL named my hometown this year’s host city, Near Eastside leaders were revitalizing the heart of their neighborhoods. 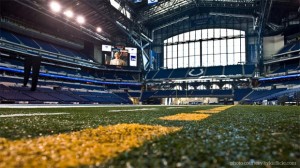 Since the early 1990s, the NFL has a tradition of leaving a legacy in each Super Bowl host city by helping to fund a Youth Education Town (YET) there. YETs are typically built in lower-income neighborhoods to offer afterschool programming, including sports, tutoring, arts, and career training. But long before Indianapolis became the host city for Super Bowl XLVI, churches, including my own, and neighborhood groups on the city’s Near Eastside were diligently working to leave a positive legacy of a different kind.

The vision began years ago. In 2008, as Indianapolis was creating a bid to host Super Bowl XLVI, the city decided it wanted to do something different: Instead of building a YET, Indianapolis’s Super Bowl Legacy Project would showcase an entire neighborhood, with the YET being one part of the effort. Bill Taft, Indianapolis director of the national nonprofit Local Initiatives Support Corp (LISC), e-mailed Mark Miles, chairman of the Super Bowl Bid Committee, and pitched the idea of focusing on an entire neighborhood. Miles, inspired by former NBA player Kevin Johnson’s work in Sacramento, was receptive to the idea. Taft suggested two neighborhoods that had been part of the Great Indy Neighborhoods Initiative, in which neighbors developed a vision for rebuilding their communities.

The 2012 Host Committee decided to showcase the Near Eastside, 21 neighborhoods just east of downtown Indianapolis. The choice was apt, for the Near Eastside neighbors have a long history of talking and working together. For example, the Near Eastside Community Organization (NESCO) was founded in 1970, before the worst urban challenges hit the neighborhood, and churches were the driving force during NESCO’s early years. 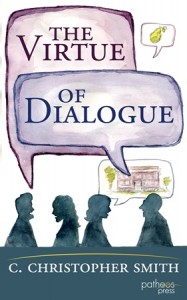 This story that this article tells is deeply interconnected with the story of our church’s practice of conversation that I have told in my new ebook:

The Virtue of Dialogue:
Conversation as A Hopeful Practice
of Church Communities.
[ More info ]  [ Buy now for Kindle – $2.99 ]
And in conjunction with the release of the ebook, I have started a series this week on the Slow Church blog that I hope will stir the imaginations of churches about how they might become more conversational.  Here are the first five posts in the series. (The second five posts will go live next week…)
#1) Open Existing Church Meetings for Conversation.
#2) Leveraging the Skills of All Our Members.
#3) Engaging our Children and Youth in Conversation.
#4) Engaging our Neighbors More Intentionally.
#5) Engage the Whole Church in Caring for the Church Property.