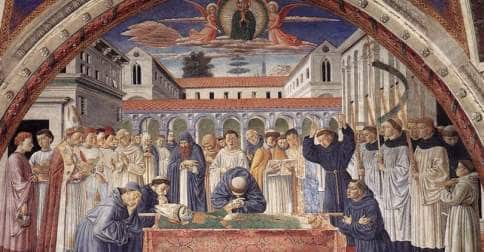 Today, May 17, is the feast day of St. Possidius, a North African saint who was a student of St. Augustine, and one of Augustine’s earliest biographers.

St. Possidius (5th century) was a friend of St. Augustine of Hippo who wrote a reliable biography and an indiculus or list of his works. He was bishop of Calama in the Roman province of Numidia. (via Wikipedia)

St. Possidius was a native of the proconsular Africa, and had his education under the great St. Augustine. In 397 he was chosen bishop of Calama in Numidia, a diocese he found distracted by the factions both of heathens and Donatists. In 404 a party of the latter dragged him out of his house, beat him, and threatened his life. All the revenge he took of them was to obtain their pardon from the emperor.

Four years after this, the idolaters in a riotous festival on the 1st of June, had the insolence to dance round the church, throw stones into it, and set it on fire, wounding several of the clergy, and killing one upon the spot. Nectarius, a principal person among the heathens, who had no share in this tumult, wrote to St. Augustine to beg him to intercede with the emperor for the pardon of the rioters, observing to him that it is the duty of the Christian pastors to employ themselves in works of mercy and peace. By the interposition of Possidius their punishment was only an order which the emperor sent for the breaking down their idols, with a prohibition of their abominable festivals and sacrifices. When the relics of St. Stephen were brought into Africa about the year 410, our holy bishop was careful to enrich Calama with a portion of them, by which several miracles were there wrought, as St. Augustine informs us. St. Possidius was doubtless one of those bishops who established among the clergy of their cathedrals a monastic regularity in imitation of St. Augustine, and according to the rule by him instituted, as our saint mentions in the life of that great doctor; and St. Augustine speaks of the poor religious men of Calama.

The Vandals passed over from Spain into Africa with an army of fourscore thousand veteran soldiers, long accustomed to blood and plunder; and made themselves in a short time masters of Mauritania, Numidia, and the proconsular province, except the strong fortresses of Carthage, Cirta, and Hippo. They pillaged the whole country and the towns which lay in their way; and among others Calama, which seems to have never since lifted up its head. St. Possidius took refuge in Hippo with his dear master, St. Augustine, who soon afterward died in his arms in 430, during the siege of that city, which some time after fell into the hands of the barbarians. These were severe trials to our saint, who from that time lived in perpetual banishment from his flock. He wrote the life of St. Augustine, with a catalogue of his works. The Italians say, that from Africa he came into Italy, and died at Mirandola. That city and Rhegio in Apulia honoured him as patron. The regular canons keep his festival on the 17th of May, and regard him as one of the most illustrious fathers of their order.

(text adapted from Butler’s Lives of the Saints, a public domain work)