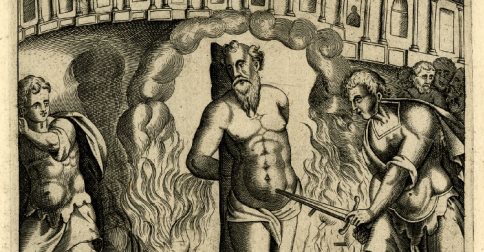 February 23 is the Feast Day of St. Polycarp of Smyrna, a martyr of the second century. In remembrance, we offer the story of his martyrdom…

The following text tells the story of Polycarp’s martyrdom. Polycarp
was born in approximately 70 A.D. to a wealthy family. He
eventually was discipled by the Apostle John and later became the
bishop of Smyrna. His martyrdom took place in either 155 or 156,
and this text was recorded at some point after that date in the second
century.

The Church of God which sojourns at Smyrna, to the Church of God
sojourning in Philomelium, and to all the congregations of the Holy and
Catholic Church in every place: Mercy, peace, and love from God the
Father, and our Lord Jesus Christ, be multiplied.

Chapter 1
The Reason We Write.

We have written to you, brothers and sisters, about the martyrs, and
especially about the blessed Polycarp, who put an end to the persecution,
having set a seal upon it by his martyrdom. For almost all the events that
happened previously to this one, took place that the Lord might show us
from above a martyrdom that becomes the Gospel. For Polycarp waited to
be delivered up, even as the Lord had done, that we also might become his
followers, while we look not merely to our own concerns but also regard
our neighbors. For it is the part of a true and well-founded love, not only to wish one’s self to be saved, but also all the brothers.


Chapter 2
The Wonderful Constancy of the Martyrs.

All the martyrdoms, then, which took place according to the will of God
were blessed and noble. For it becomes us who profess greater piety than
others, to ascribe to God the authority over all things. And truly, who can
fail to admire their nobleness of mind, and their patience, with that love
displayed towards their Lord – who, when they were so torn with scourges,
that the frame of their bodies, even to the very innermost veins and arteries, was laid open, still patiently endured, while even those that stood by pitied and bewailed them. But they reached such a level of magnanimity, that not one of them let a sigh or a groan escape them. Thus, they proved to us all that those holy martyrs of Christ, at the very time when they suffered such torments, were absent from the body, or rather that the Lord then stood by them and communed with them. And, looking to the grace of Christ, they despised all the torments of this world, redeeming themselves from eternal punishment by the suffering of a single hour. For this reason, the fire of their savage executioners appeared cool to them. For they kept before their view escape from that fire which is eternal and never shall be quenched, and looked forward with the eyes of their heart to those good things which are laid up for those who endure – things “which ear has not heard, nor eye seen, neither have entered into the heart of man,” (I Cor 2:9) but which were revealed by the Lord to them, inasmuch as they were no longer men, but had already become angels. And, in a similar manner, those who were condemned to the wild beasts endured dreadful tortures, being stretched out upon beds full of spikes, and subjected to various other kinds of torments, in order that, if it were possible, the tyrant might by their lingering tortures lead them to a denial of Christ.

Chapter 3
The Constancy of Germanicus.
The Death of Polycarp is Demanded.

For the devil did indeed invent many things against them; but thanks be to
God, he could not prevail. For the most noble Germanicus strengthened the
timidity of others by his own patience, and fought heroically with the wild
beasts. For, when the proconsul sought to assuade him, and urged him to
take pity upon his age, he attracted the wild beast towards himself, and
provoked it, being desirous to escape all the more quickly from an
unrighteous and impious world. But upon this the whole multitude,
marveling at the nobility of mind displayed by the devout and godly race of
Christians, cried out, “Away with the Atheists; let Polycarp be sought out!”


Chapter 4
Quintus the Apostate.
Now Quintus, a Phrygian, who had recently arrived from Phrygia, became
afraid when he saw the wild beasts. This was the man who forced himself
and some others to come forward voluntarily [for trial]. The proconsul,
after many entreaties, persuaded him to swear and to offer idolatrous
sacrifices. Therefore, brothers, we do not commend those who give
themselves up to suffering, seeing that the Gospel does not teach us to do
so.


Chapter 5
The Departure and Vision of Polycarp.
But the most admirable Polycarp, when he first heard that he was sought
out, was not disturbed in the least, but resolved to continue into the city. However, in deference to the wish of many, he was persuaded to leave it. He departed, therefore, to a country house close to the city. There he stayed with a few friends, engaged in nothing else night and day than praying for all people, and for the Churches throughout the world, according to his usual custom. And while he was praying, a vision presented itself to him three days before he was taken; and behold the pillow under his head seemed to be on fire. Upon this, he turned to those that were with him, and said to them prophetically, “I must be burnt alive.”