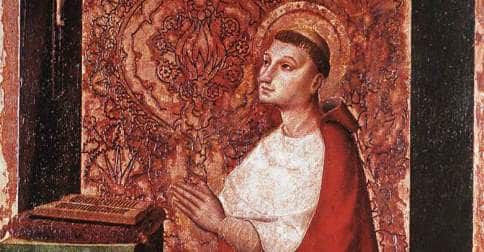 Today, July 5, is the feast day of St. Peter of Luxembourg, a 14th century saint known for his extreme asceticism and also his extreme devotion to the poor and downtrodden.

“St. Peter teaches us how denying the self, rank, riches,
the highest dignities, and all this world can give,
may serve to make a Saint.”

Pierre (Peter) de Luxembourg was born in mid-1369 in Meuse as the second of six children to Guido de Luxembourg and Mahaut de Châtillon. His parents died in his childhood (father when he was two and mother when he was four) which prompted his aunt Jeanne – the countess of Orgières – to raise him in Paris. At twelve years of age, In 1381 he travelled to London to offer himself as a hostage to the English to secure his brother’s release back to France. The English were so perplexed and impressed with the selflessness of this offer that his brother was released back to France. This even reached the ears of Richard II who invited him to remain at his court though he decided to go back to Paris to follow Jesus Christ in his vocation to the priesthood.

In 1377 he was sent for his education to the Parisian college where an instructor was the theologian and astrologer Pierre d’Ailly. In 1379 he was selected to be the canon for the cathedral chapter of Notre Dame de Paris. In 1381 he became a canon for the cathedral chapter of Notre Dame de Chartres and was elevated to the position of Archdeacon of Dreux in the Chartres diocese. In 1382 he was selected to be the Archdeacon for Cambrai. During his time as a pseudo-cardinal he made attempts to end the Western Schism which were all unsuccessful. The antipope invited Pierre on 23 September 1386 to join him at his court in Avignon where he would remain until his death. He governed his diocese with ail the zeal and prudence of maturity, and divided his revenues in three parts—for the Church, the poor, and his household. His charities often left him personally destitute, and he had but twenty pence left when he died. Created Cardinal of St. George, his austerities and ascetism in the midst of a court were so severe that he was ordered to moderate them. Peter replied, “I shall always be an unprofitable servant, but I can at least obey.” Ten months after his promotion he fell sick of a fever, and lingered for some time in a sinking condition, his holiness increasing as he drew near his end. Among other miracles is the following: On July 5, 1432, a child about twelve years old was killed by falling from a high tower, in the palace of Avignon, upon a sharp rock. The father, distracted with grief, picked up the scattered pieces of the skull and brains, and carried them in a sack, with the mutilated body of his son, to St. Peter’s shrine, and with many tears be- sought the Saint’s intercession. After a while the child returned to life, and was placed upon the altar for all to witness. In honor of this miracle the city of Avignon chose St. Peter as its patron Saint.

Pierre died in mid-1387 from anorexia and fever due to the asceticism he had imposed upon himself; he had fallen ill in March. He died at a Carthusian convent in Villeneuve-lès-Avignon in Avignon. His wish was to be buried in a common grave like that of the paupers. Miracles were soon reported to emerge at his tomb prompting his brother Jean to order (on 16 March 1395) the construction of a church dedicated to the sainted Pope Celestine V to which his remains were transferred to.