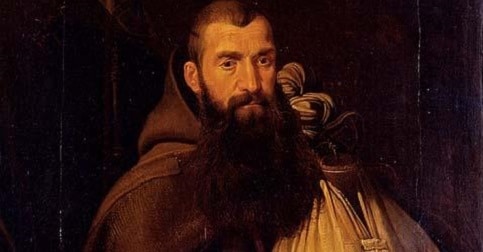 Today, May 18, is the feast day of St. Felix of Cantalice, the first Capuchin friar to be named a saint.

Felix of Cantalice, O.F.M. Cap., was born on 18 May 1515 to peasant parents in Cantalice, Italy, in the central Italian region of Lazio. Canonized by Pope Clement XI in 1712, he was the first Capuchin friar to be named a saint.

Felix was the third of four sons born to Santi and Santa Porri. They were poor farmers. At about the age of ten, Felix was hired out first as a shepherd to a family at Cittàducale, where he later worked as a farm hand. Until the age of twenty-eight he worked as a farm laborer and shepherd. He developed the habit of praying while he worked. Toward the end of autumn 1543, Felix entered the newly founded Capuchin friars as a lay brother at the Citta Ducale friary in the municipality of Anticoli Corrado. It is said that he was well noted for his piety. In 1547 he was sent to Rome as quaestor of the Capuchin Friary of St. Bonaventure, where he spent his remaining 40 years begging alms to help in the friars’ work of aiding the sick and the poor.

In Rome, Brother Felix became a familiar sight, wandering barefoot through the streets, with a sack slung over his shoulders, knocking on doors to seek donations. He received permission from his superiors to help the needy, especially widows with many children. It is said that his begging sack was as bottomless as his heart. Brother Felix blessed all benefactors and all those he met with a humble “Deo Gratias!” (thanks be to God!), causing many to refer to him as “Brother Deo Gratias”. Felix was so successful in his work that during the famine of 1580, the political leader of Rome asked the Capuchins if they would ‘lend’ Felix to them so he could collect food and provisions for the entire city. The Capuchins agreed and Felix embraced his new task.

He preached in the street, rebuked corrupt politicians and officials, and exhorted young men to stop leading dissolute lives. He also composed simple teaching canticles, and arranged for children to gather in groups to sing them as a way to teach them the catechism.

The plain-spoken Brother Felix was a good friend of St. Philip Neri and an acquaintance of Charles Borromeo. Felix developed a reputation as a healer. As he got older, his superior ordered him to wear sandals to protect his health. Cardinal Santori had offered to use his influence to have the elderly Felix relieved of the difficult task of questing, but Felix refused.

Felix died in Rome in 1587 on his 72nd birthday and was buried in the crypt of the Church of Santa Maria della Concezione dei Cappuccini.

He was beatified on 1 October 1625 by Pope Urban VIII and canonized on 22 May 1712 by Pope Clement XI. He was the first Capuchin friar in the history of the Order to be canonized. His feast day is celebrated on the Calendar of Saints of the Franciscan Order on May 18.