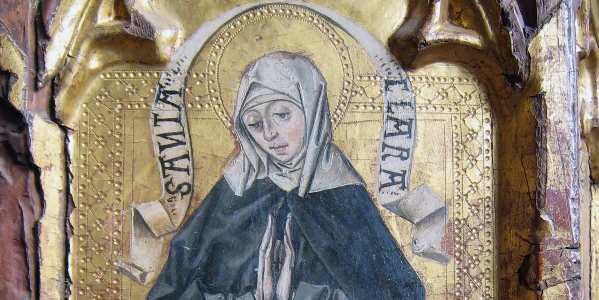 This week marks the birthday of St. Clare of Asssi, the founder of the monastic order known as the Little Clares …

Ernest Gilliat-Smith –
St. Clare of Assisi :
Her Life and Legislation

Clare of Assisi (16 July 1194 – 11 August 1253) was an Italian saint and one of the first followers of Francis of Assisi.She founded the Order of Poor Ladies, a monastic religious order for women in the Franciscan tradition, and wrote their Rule of Life, the first set of monastic guidelines known to have been written by a woman. Following her death, the order she founded was renamed in her honor as the Order of Saint Clare, commonly referred to today as the Poor Clares.

Clare was born in Assisi during the High Middle Ages, the eldest daughter of Favarone Sciffi, Count of Sasso-Rosso and his wife Ortolana. Traditional accounts say that Clare’s father was a wealthy representative of an ancient Roman family, who owned a large palace in Assisi and a castle on the slope of Mount Subasio. Ortolana belonged to the noble family of Fiumi, and was a very devout woman who had undertaken pilgrimages to Rome, Santiago de Compostela and the Holy Land. Later in life, Ortolana entered Clare’s monastery, as did Clare’s sisters, Beatrix and Catarina (who took the name Agnes and was later declared a saint herself).

As a child, Clare was devoted to prayer. Although there is no mention of this in any historical record, it is assumed that Clare was to be married in line with the family tradition. However, as a teen she heard Francis preach during a Lenten service in the church of San Giorgio at Assisi and asked him to help her to live after the manner of the Gospel. On the evening of Palm Sunday, 20 March 1212, she left her father’s house and accompanied by her aunt Bianca and another companion proceeded to the chapel of the Porziuncula to meet Francis. There, her hair was cut, and she exchanged her rich gown for a plain robe and veil.

Francis placed Clare in the convent of the Benedictine nuns of San Paulo, near Bastia. Her father attempted to force her to return home. She clung to the altar of the church and threw aside her veil to show her cropped hair. She resisted any attempt, professing that she would have no other husband but Jesus Christ. In order to provide the greater solitude Clare desired, a few days later Francis sent her to Sant’ Angelo in Panzo, another monastery of the Benedictine nuns on one of the flanks of Subasio. Clare was soon joined by her sister Catarina, who took the name Agnes. They remained with the Benedictines until a small dwelling was built for them next to the church of San Damiano, which Francis had repaired some years earlier. Other women joined them, and they were known as the “Poor Ladies of San Damiano”. They lived a simple life of poverty, austerity and seclusion from the world, according to a Rule which Francis gave them as a Second Order (Poor Clares). (via Wikipedia)

Ernest Gilliat-Smith –
St. Clare of Assisi :
Her Life and Legislation