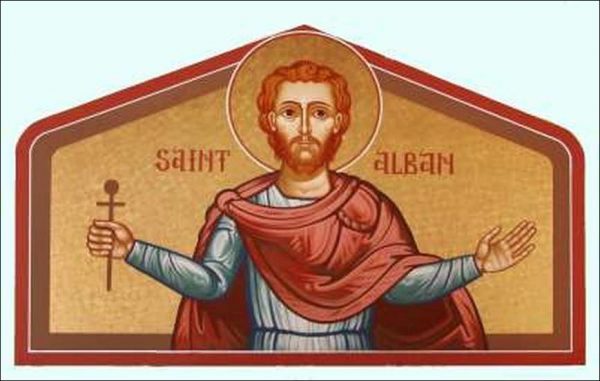 This week marks the feast day of St. Alban …

Saint Alban is venerated as the first-recorded British Christian martyr. Along with fellow Saints Julius and Aaron, Alban is one of three named martyrs recorded at an early date from Roman Britain (“Amphibalus” was the name given much later to the priest he was said to have been protecting). He is traditionally believed to have been beheaded in the Roman city of Verulamium (modern St Albans) sometime during the 3rd or 4th century, and his cult has been celebrated there since ancient times.

Little is known about the real Alban (estimated to have died c. 209 – 305 AD, depending on interpretations), as there are no contemporaneous accounts of his martyrdom and the major sources on his life were written hundreds of years after his death, containing wondrous embellishments, which may or may not refer to real events.

Saint Alban was long regarded as a genuine martyr saint, the protomartyr of Britain, and for much of the 20th century controversy centred on the date of his martyrdom. More recently, however, some researchers have taken a more skeptical view about his historicity. (via Wikipedia)

(PDF and other formats via Google Books )