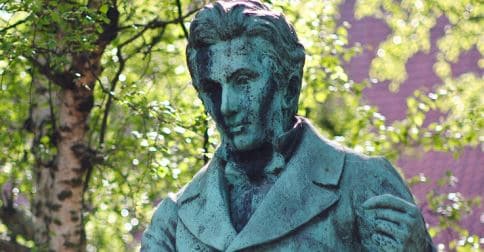 Yesterday marked the birthday of Danish philosopher Søren Kierkegaard (b. 1813).

In honor of the occasion, here is one of his renowned essays:

The Crowd is Untruth

It comforts me, that the right occasion is now there for you; which I have honestly intended during my labor and in my labor. For if it were possible that reading what I write became worldly custom, or even to give oneself out as having read it, in the hope of thereby winning something in the world, that then would not be the right occasion, since, on the contrary, misunderstanding would have triumphed, and it would have also deceived me, if I had not striven to prevent such a thing from happening.

This, in part, is a possible change in me, something I even wish for, basically a mood of soul and mind, which does not produce change by being more than change and therefore produces nothing less than change; it is rather an admission, in part a thoroughly and well thought-out view of “life,” of “the truth,” and of “the way.”

There is a view of life which holds that where the crowd is, the truth is also, that it is a need in truth itself, that it must have the crowd on its side. [1] There is another view of life; which holds that wherever the crowd is, there is untruth, so that, for a moment to carry the matter out to its farthest conclusion, even if every individual possessed the truth in private, yet if they came together into a crowd (so that “the crowd” received any decisive, voting, noisy, audible importance), untruth would at once be let in. [2]

For “the crowd” is untruth. Eternally, godly, Christianly what Paul says is valid: “only one receives the prize,” [I Cor. 9:24] not by way of comparison, for in the comparison “the others” are still present. That is to say, everyone can be that one, with God’s help – but only one receives the prize; again, that is to say, everyone should cautiously have dealings with “the others,” and essentially only talk with God and with himself – for only one receives the prize; again, that is to say, the human being is in kinship with, or to be a human is to be in kinship with the divinity. The worldly, temporal, busy, socially-friendly person says this: “How unreasonable, that only one should receive the prize, it is far more probable that several combined receive the prize; and if we become many, then it becomes more certain and also easier for each individually.” Certainly, it is far more probable; and it is also true in relation to all earthly and sensuous prizes; and it becomes the only truth, if it is allowed to rule, for this point of view abolishes both God and the eternal and “the human being’s” kinship with the divinity; it abolishes it or changes it into a fable, and sets the modern (as a matter of fact, the old heathen) in its place, so that to be a human being is like being a specimen which belongs to a race gifted with reason, so that the race, the species, is higher than the individual, or so that there are only specimens, not individuals. But the eternal, which vaults high over the temporal, quiet as the night sky, and God in heaven, who from this exalted state of bliss, without becoming the least bit dizzy, looks out over these innumerable millions and knows each single individual; he, the great examiner, he says: only one receives the prize; that is to say, everyone can receive it, and everyone ought to become this by oneself, but only one receives the prize. Where the crowd is, therefore, or where a decisive importance is attached to the fact that there is a crowd, there no one is working, living, and striving for the highest end, but only for this or that earthly end; since the eternal, the decisive, can only be worked for where there is one; and to become this by oneself, which all can do, is to will to allow God to help you – “the crowd” is untruth.