The Weight of Memory: A Novel
Shawn Smucker

I’m not normally a fan or reader of speculative fiction. The writer really has to be skilled to lure me into their “other” world. Margaret Atwood, Neil Gaiman, C.S. Lewis, and Indianapolis writer Marcus Broadus fall into that skilled category and I’ve been immersed in their stories. Shawn Smucker is likewise a masterful story-teller and writer and I savored every twist and turn of The Weight of Memory. That’s not to say I enjoyed every twist and turn – but I knew I was in the good hands and heart of a wise guide and so was along for the journey.

The journey begins with Paul Elias receiving a death sentence from his doctor. He could die immediately or anytime in the next three months. His thoughts immediately turn to his granddaughter, the precocious Pearl, who is eleven, going on twelve. Elias is her de factor parent, a widower raising his estranged son’s daughter. What’s he to do about Pearl? Who will care for her, this strange child prone to running away and seeing a person who’s not there?

The journey then becomes literal as he and Pearl load their things and head to Nysa, the town where he grew up. The town he left at nineteen when his young wife drowned and left him and newborn boy named John. The town where he thinks he might be able to find something… perhaps even someone to care for Pearl. The town that— as he finds upon his arrival— is almost dead and holds many secrets and tales of even more mysterious drownings in the lake where his bride Mary died.

Upon arrival, at the diner where he and Mary and their best friends Tom and Shirley used to hang out, he encounters Tom. Tom is a shell of the vivacious, boisterous young man he was. He too, is a widower. He, like Nysa, and like Paul (who never speaks of his diagnosis), harbors secrets. With the death of hotels in the run down town, Tom invites Paul and Pearl to stay with him. So they make the short trip out of town to his place – on “the lake.” There, Pearl’s disappearances and stories of the mysterious silver-haired woman (whom she’s been following on her disappearances) continue.

There’s more I could say, but to do so, I fear would ruin a very enjoyable read. The tale is told mostly by Elias, with a few interjections in Pearl’s own words. The narrative is rich with detail. Smucker paints pictures with words that draw us into his story. His characters are interesting and we care about them, even when they are a bit spooky. He invites a sense of wonder and mystery that is this life by transporting us to this slightly “other” world. Is it truly an “other” world, or a mirror, or reality that is separated by a thin veil? I must admit, being the skeptical reader that I am, I was afraid that the ending would be too “neat.” It wasn’t. That delighted me. It was just right, and I was richer for it.

And, so, there is
the weight of memory
— Li-Young Lee 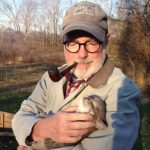