Formation of a Peace Ethic

The Audacity of Peace
Scot McKnight

This is a slim book full of robust insights about what the author, the prominent scholar Scot McKnight, repeatedly refers to as the “peace ethic.”  On the back of the book McNight is introduced as “a world-renowned speaker, writer, professor, and equipper of the church.” There is good reason for such words, especially in the world of Christian evangelicalism.

McKnight (b. 1953) grew up and was educated in conservative Baptist circles, although he earned his Ph.D. at the University of Nottingham under the eminent New Testament scholar James Dunn. He currently is Chair of New Testament at Northern Seminary, which represents a theologically conservative alternative within its association with American Baptist Churches USA. In 2014, however, McKnight joined, and was ordained by, the Anglican Church of North America, a conservative alternative to the Episcopal Church in the U.S.

In spite of his past and present church affiliations, McKnight is also known as a proponent of Anabaptist ideas, and this is clearly seen in the present book where he shares some of his reasons for embracing a peace ethic. While the book does have a few footnotes, it is primarily the author’s testimony regarding his advocacy for such an ethic rather than a “scholarly” work, such as most of his more than fifty books are.

In the Preface, McKnight clearly states, “I am a peace witness” (9), and then he proceeds in five chapters to focus on the thinkers who shaped his peace ethic. The first is Ronald Sider, whom he identifies as “an American Mennonite,” although Sider was born in Canada and grew up as a member of the small Brethren in Christ denomination. He is, though, both an ordained Brethren in Christ minister and a Mennonite minister. McKnight was influenced most by Sider’s Christ and Violence (1979), which he says is “a short book that converted me to a peace ethic in a single reading” (16). From Sider’s work, he became convinced that the Way of Jesus is the Way of the Cross.

In the second chapter, McKnight pivots to the Lutheran pastor/theologian, Dietrich Bonhoeffer, who was executed by the Nazis in 1945, four months before Sider’s sixth birthday. When still a college student, McKnight tells how he was significantly influenced by Bonhoeffer’s best-known book, The Cost of Discipleship (1937, 1963). He adds that Bonhoeffer “was the first to turn me to the Sermon on the Mount” (39). His study of Bonhoeffer’s book and the study of Jesus’s “sermon” as recorded in Matthew led him to embrace the significant concepts of “cruciformity” and “Christoformity” as key elements of his peace ethic (55).

McKnight briefly mentions Michael J. Gorman in the first chapter, but Chapter 3 is titled “Gorman and Bonhoeffer.” Gorman (b. 1955), a United Methodist scholar, authored a book titled Cruciformity (2001). From Gorman’s emphasis there and in his later writings on cruciformity, McKnight writes, “God’s work co-morphs us to be like Christ, which I have learned to call Christoformity” that, he asserts, “constrains a peace ethic” (61, 62).

From this standpoint, and in contrast to the common idea that Bonhoeffer was actively engaged in the plot to kill Hitler, McKnight insists, along with Mennonite scholar Mark Thiessen Nation, “Bonhoeffer operated with one of the most consistently pacifistic christoform hermeneutics in the history of the church” (66). (For more on this, see the Forward that McKnight wrote for Nation’s Discipleship in a World Full of Nazis: Recovering the True Legacy of Dietrich Bonhoeffer, 2022.)

In the Old Testament, the warfare not only depicted but apparently condoned or even commanded by God is one of the biggest challenges for those Christians who embrace pacifism as a central characteristic of a peace ethic. That is the issue dealt with in the fourth chapter, which is titled simply “Craigie.” Peter C. Craigie (b. 1938) was a British Bible scholar, and McKnight says that Craigie’s The Problem of War in the Old Testament (1976) was the first of several books that helped him understand how the Old Testament can be aligned with a peace ethic. It was particularly Craigie’s explaining that “God the Warrior became the Crucified God” that impressed him (84).

Craigie’s statement, and McKnight’s positive use of it, sounds as if God changed, but it would have been helpful if these Bible scholars had dealt with this issue by considering whether it was really God who changed or whether it was the human understanding of God that changed because of Jesus Christ.

“Collins” is the title of the fifth and last chapter, which deals with the Book of Revelation. The title refers to John J. Collins (b. 1946), as the Irish Catholic Old Testament scholar and author of Apocalypse, Prophecy and Pseudepigraphy (2015). Of particular significance is the important insight that “the white horse rider’s weapon is a sword that comes from the mouth.” Thus, “Here we have the Way of the Word, not the Way of the Sword” (92).

So, in this (too?) brief book, Scot McKnight audaciously advocates a peace ethic for us as contemporary followers of Jesus. Although it was not released until June 2022, that was still too soon for the author to deal with the challenges to pacifism and the peace ethic that were spawned by Russia’s war upon Ukraine—which is a shame. It would be interesting to see how the author would relate to that current war and peace issue.

It would also have been helpful if McKnight could have written something about how a peace ethic such as he embraces speaks to contemporary culture wars. Can his emphasis on Christoformity also foster peace in that warring arena? Perhaps that is a challenge he could take up in a subsequent book. 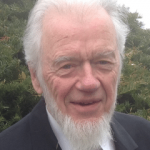